French yellow vest protesters set fires along a march route through Paris on Saturday to drive home a message to a government they see as out of touch with the problems of the poor — rebuilding the fire-ravaged Notre Dame Cathedral isn’t the only problem France needs to solve.

Like the high-visibility vests the protesters wear, the scattered small fires in Paris appeared to be a collective plea to the government to “look at me — I need help too!”

Police fired water cannon and sprayed tear gas to try to control radical elements on the margins of the largely peaceful march, one of several actions around Paris and other French cities.

The protesters were marking the 23rd straight weekend of yellow vest actions against economic inequality and President Emmanuel Macron’s government, which they see as favouring the wealthy and big business at the expense of ordinary workers. Protesters see themselves as standing up for beleaguered French workers, students and retirees who have been battered by high unemployment, high taxes and shrinking purchasing power. 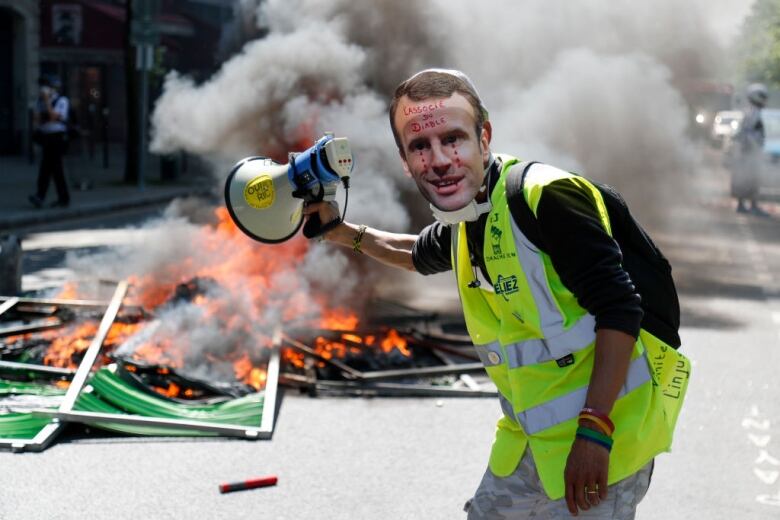 A protester wearing a mask of French President Emmanuel Macron crying stands next to a burning barricade during an anti-government demonstration on Saturday in Paris. (Zakaria Abdelkafi/AFP/Getty Images)

Associated Press reporters saw a car, motorbikes and barricades set ablaze around the Place de la Republique plaza in eastern Paris. The smell of tear gas fired by police mixed with the smoke, choking the air.

Paris firefighters — who struggled earlier this week to prevent the 12th century Notre-Dame from collapsing — quickly responded to extinguish the flames at Saturday’s protest.

One masked protester dressed in black jumped on a Mercedes parked along the march route, smashing its front and back windshields. 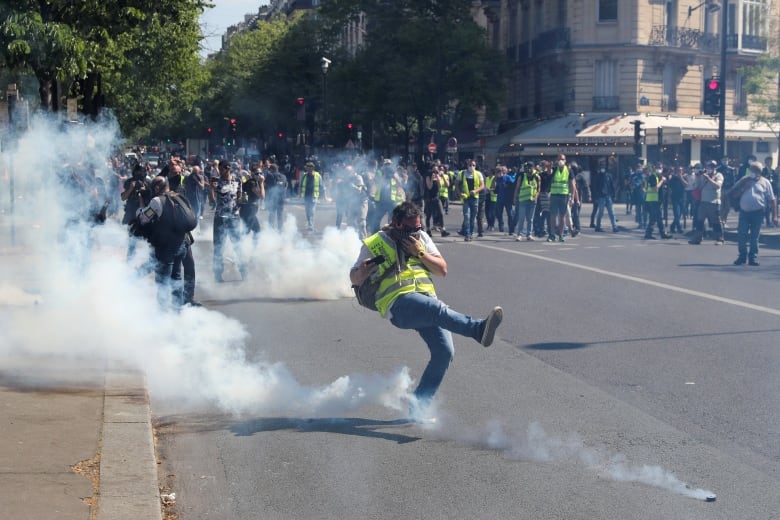 The tensions focused on a march of several thousand people that started at the finance ministry in eastern Paris to demand lower taxes on workers and retirees and higher taxes on the rich.

Another group of about 200 people tried to march to the president’s Élysée Palace in central Paris, but riot police blocked them at the neo-classical Madeleine Church.

Another group wanted to march to Notre-Dame itself, but were banned by police, who set up a large security perimeter around the area.

Some 60,000 police officers were mobilized for protests across France. The movement is largely peaceful, but extremists have attacked treasured monuments, shops and banks and clashed with police.

One protester carried a huge wooden cross resembling those carried in Good Friday processions as he walked on a nearby Paris embankment.

Many protesters were deeply saddened by the fire at Notre-Dame. But at the same time they are angry at the $1.2 billion Cdn in donations for Notre Dame renovations that poured in from French tycoons while their own economic demands remain largely unmet and they struggle to make ends meet.

“I think what happened at Notre Dame is a great tragedy but humans should be more important than stones. And if humans had a little bit more money, they, too, could help finance the reconstruction work at Notre-Dame. I find this disgusting,” said protester José Fraile.

Some in the yellow vest movement felt outraged when, in just a few hours, billionaires pledged hundreds of millions of dollars to help restore the damaged cathedral, while their demands remain unsatisfied in their longstanding fight with the French government.

“You’re there, looking at all these millions accumulating, after spending five months in the streets fighting social and fiscal injustice. It’s breaking my heart,” said Ingrid Levavasseur, a founding leader of the movement.

“It took [Macron] less than 24 hours to speak about the fire, while he made us wait for three weeks before addressing our issues,” she said.

“The yellow vests will show their anger against the billion found in four days for stones, and nothing for the needy,” wrote Pierre Derrien on the Facebook page of a yellow vests group based in the southern city of Montpellier.

“If they can give dozens of millions to rebuild Notre Dame, they should stop telling us there is no money to respond to the social emergency,” CGT trade union leader Philippe Martinez said.

More than $1.2B pledged for cathedral

More than $1.2 billion has been pledged for the cathedral’s restoration, and many French citizens believe the money could be better spent elsewhere. Some have also criticized the billionaires’ donations because their pledges make them eligible for huge tax deductions.

The Pinault family has said, however, they will not ask for a tax deduction for their donation to Notre-Dame, and Arnault said his family holding company was not eligible for tax breaks because it has already reached the limit for deductions.

Macron had been scheduled to lay out his responses to yellow vest concerns on Monday night — but cancelled the speech because the Notre-Dame fire broke out. He’s now expected to do so next Thursday.

Some yellow vest critics accuse Macron of trying to exploit the fire for political gain. One protester carried a sign targeting Macron that read: “Pyromaniac — we are going to carbonize you.”

Another huge sign read: “Victor Hugo thanks all the generous donors ready to save Notre-Dame and proposes that they do the same thing with Les Misérables,” referring to the famed author’s novels about the cathedral and the struggles of France’s poor.

Against a common foe, nations around the world go their own way on pandemic