Kosovo brought back 110 of its citizens from Syria on Saturday, including jihadists who had gone to fight in the country’s civil war and 74 children, the government said.

After the collapse of Islamic State’s self-declared caliphate in Syria and Iraq, countries around the world are wrestling with how to handle militants and their families seeking to return.

The population of Kosovo, which declared independence from Serbia in 2008, is nominally 90 per cent Muslim, but largely secular in outlook.

More than 300 Kosovo citizens have travelled to Syria since 2012 and 70 men who fought alongside militant groups were killed.

“Today, in the early hours of the morning, an important and sensitive operation was organized in which the government of Kosovo with the help of the United States of America has returned 110 of its citizens from Syria,” Kosovan Justice Minister Abelard Tahiri said at a press conference.

Tahiri did not specify what role the United States had played, but a plane with a U.S. flag on its tail was seen in the cargo area of Pristina airport as the operation was ongoing. 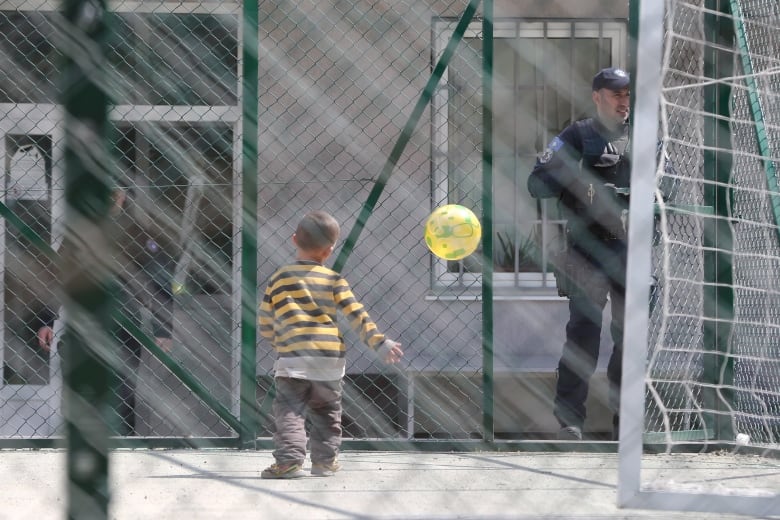 A child plays with a ball near a police officer at the Vranidol detention centre. (Visar Kryeziu/Associated Press)

When asked about the return of fighters to Kosovo and the separate return of a fighter to Bosnia, U.S. military spokesperson Sean Robertson said, “U.S. assets were used in support of this repatriation operation.”

“At no time did the U.S. take custody of the FTF [foreign terrorist fighter] detainees,” Robertson said. He declined to provide further details, citing security reasons.

Authorities said, among those who were returned were four fighters, 32 women and 74 children, including nine without a parent.

The four fighters were immediately arrested and the state prosecutor said indictments against them will soon follow.

After several hours at the airport, two busloads of women and children were transported under police escort to an army barracks just outside Pristina. 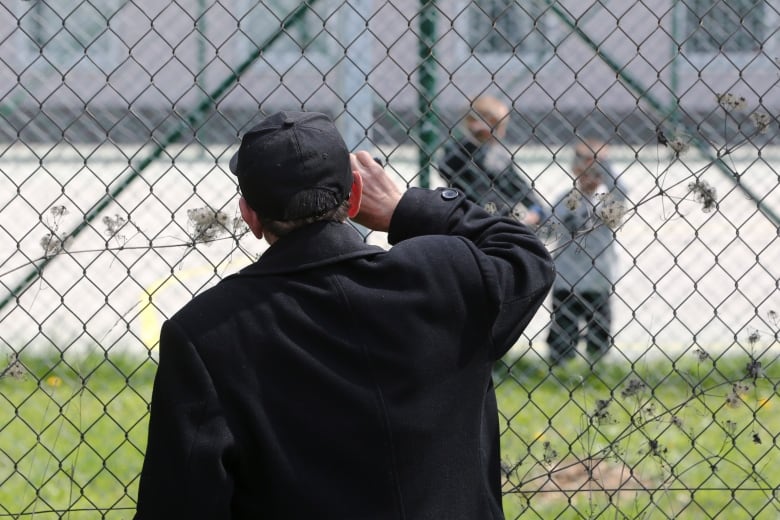 A man calls to his nephew behind a fence at a detention centre. (Visar Kryeziu/Associated Press)

“We will not stop before bringing every citizen of the Republic of Kosovo back to their country and anyone that has committed any crime or was part of these terrorist organizations will face justice,” Tahiri said.

“As Kosovo, we cannot allow that our citizens be a threat to the West and to our allies.”

International and local security agencies have previously warned of the risk posed by returning fighters. In 2015, Kosovo adopted a law making fighting in foreign conflicts punishable by up to 15 years in jail.

The U.S. commended Kosovo for the return of its citizens and called other countries to do the same.

“With this repatriation, Kosovo has set an important example for all members of the Global Coalition to Defeat ISIS and the international community to follow. We applaud their compassion in accepting the return of this large number of civilians,” the U.S. Embassy in Pristina said in a statement.

There have been no Islamist attacks on Kosovan soil, although more than 100 men have been jailed or indicted on charges of fighting in Syria and Iraq. Some of them were found guilty of planning attacks in Kosovo.

Prosecutors said they were investigating 156 other suspects.

The government has said a form of radical Islam had been imported to Kosovo by non-governmental organizations from the Middle East after the end of its 1998-99 war of secession from Serbia.