Police in Northern Ireland said Friday they believe the dissident republican group New IRA was probably responsible for the fatal shooting of a journalist during overnight rioting in the city of Londonderry, also known as Derry.

The Police Service of Northern Ireland said 29-year-old journalist and author Lyra McKee died after she was shot during rioting in the Creggan area shortly after posting a picture on Twitter of the violence, which she described as “absolute madness.”

Assistant Chief Const. Mark Hamilton said a gunman fired a number of shots at police during the unrest Thursday evening.

“We believe this to be a terrorist act. We believe it has been carried out by violent dissident republicans,” he said.

“Our assessment at this time is that the New IRA are most likely to be the ones behind this, and that forms our primary line of inquiry.” 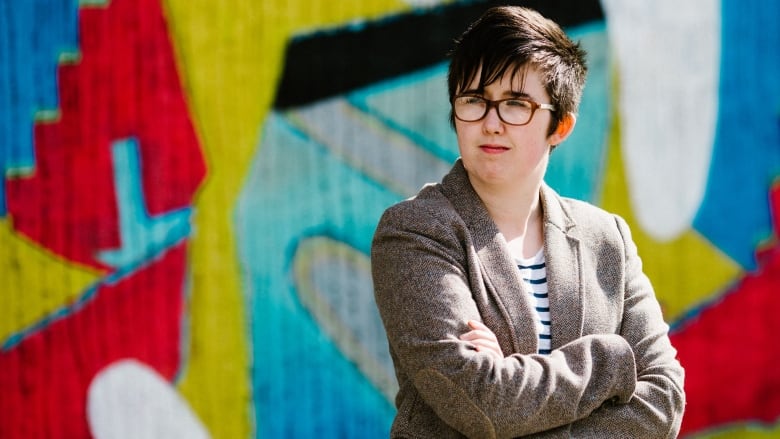 Lyra McKee, pictured in Belfast in 2017, was described by her publisher as a rising star of investigative journalism. (Jess Lowe/EPA-EFE)

A murder investigation was launched but there have been no arrests. Hamilton appealed for calm to prevail on Easter weekend.

Saoradh, a political party with links to dissident militants, said in a statement it understood McKee was standing close to police and was killed accidentally by a “republican volunteer.”

Police told Reuters they did not believe McKee was working at the time of the attack.

The New IRA is a small group of republicans who reject the 1998 Good Friday agreement that marked the Irish Republican Army’s embrace of a political solution to the long-running violence known as “The Troubles” that claimed more than 3,700 lives.

The group is also blamed for a Londonderry car bombing in January that did not cause any injuries. It is regarded as the largest of the splinter dissident groups still operating and has been linked to several other killings in the past decade.

There has been an increase in tensions in Northern Ireland in recent months with sporadic violence, much of it focused in Londonderry.

McKee rose to prominence in 2014 with a blog post describing the struggle of growing up gay in Belfast, the capital of Northern Ireland. She was writing a book on the disappearance of young people during the three decades of sectarian violence in Northern Ireland, which ended with the Good Friday agreement.

Her partner, Sara Canning, said at a vigil that McKee’s amazing potential had been snuffed out.

“It has left so many friends without their confidante,” she said.

Canning said the senseless killling “has left me without the love of my life, the woman I was planning to grow old with.”

CBC’s As It Happens spoke with Matt Hughes, a close friend of McKee’s. McKee was in his wedding party and Hughes also saw her as a journalism mentor.

“At twenty minutes past midnight last night, my wife got a phone call from Canning, and it was without a doubt the worst phone call I’ve ever heard in my life,” Hughes told As It Happens. “And just the blood ran out of me. I just felt cold. It still doesn’t feel real. It certainly didn’t then.”

Described by her publisher Faber as a rising star of investigative journalism, McKee’s death was condemned by both Irish nationalist and pro-British unionist politicians.

Heartbreaking news. A senseless act. A family has been torn apart. Those who brought guns onto our streets in the 70s, 80s &amp; 90s were wrong. It is equally wrong in 2019. No one wants to go back. My thoughts are also with the brave officers who stood in defence of their community. <a href=”https://t.co/77JO3YSYOB”>https://t.co/77JO3YSYOB</a>

A local journalist at the scene of Thursday’s shooting, Leona O’Neill, wrote on Twitter that after McKee was hit and fell beside a police Land Rover, officers rushed her to hospital, where she died.

Videos posted on social media showed police vehicles being pelted with what she said were dozens of petrol bombs, bricks, bottles and fireworks.

“We are all full of sadness after last night’s events. We cannot allow those who want to propagate violence, fear and hate to drag us back to the past,” Irish Prime Minister Leo Varadkar said in a statement.

Seamus Dooley, Irish secretary of the National Union of Journalists, said he was shocked by the death of a journalist “of courage, style and integrity.”

He offered sympathy to “her partner, her family and many friends.” An eyewitness told the BBC that a gunman fired indiscriminately into a crowd during riots on the crowded Creggan housing complex.

Speaking in Dublin, Varadkar said the people of Ireland and Northern Ireland had chosen peace and co-operation 21 years ago and will not be “dragged into the past” by political violence.

Deputy Chief Const. Stephen Martin said Friday that police believe more than one person was involved in the shooting. 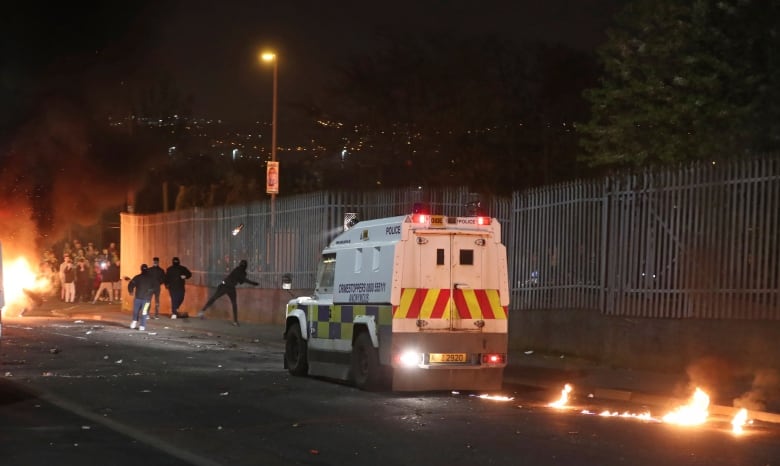 Petrol bombs were thrown at police in Creggan, Londonderry on Thursday. McKee died after being shot during rioting in the area. (Niall Carson/PA/Associated Press)

“Obviously only one person pulled the trigger but there was more than one person,” he said.

He said the violence started after police entered the area to search for weapons and that the gunman was aiming at police officers when the rioting intensified.

“The full and total responsibility for Lyra McKee’s death lies with the organization that sent someone out with a gun,” he said.

“I have known her since she was 16 years old,” he said. “She was bright, she was warm, she was witty. But most of all she was an outstanding individual, a great friend to so, so many people in this city in the short time that she was with us.”

McKee rose to prominence in 2014 with a moving blog post — “Letter to my 14-year-old self ” — describing the struggle of growing up gay in Belfast, the capital of Northern Ireland.

In the post, she described the shame she felt at 14 as she kept the “secret” of being gay from her family and friends and the love she eventually received when she was finally able to reveal it.

McKee had recently signed a contract to write two books.

Hours before her death, she tweeted a photo of the riot with the words: “Derry tonight. Absolute madness.”

As the investigation continues, friends and family are searching for a silver lining.

“There’s an optimism that this event could be the straw that breaks the camel’s back. And there’s a hope that people will see this event for the horror that it is,” Hughes told As It Happens.