Sei Young Kim had another excellent outing at KPMG Women’s PGA Championship, shooting a 3-under 67 Saturday to hold the lead after three rounds at Aronimink.

The South Korean sits at 7-under 203, two strokes ahead of Brooke Henderson and Anna Nordqvist as she tries for her first career major championship. A 10-time LPGA Tour winner, Kim was runner-up at the 2015 KPMG Women’s PGA Championship and tied for second at the Evian Championship in 2018.

The last four winners of the tournament either led or co-led after 36 holes, and Kim played like a golfer poised to make it five. 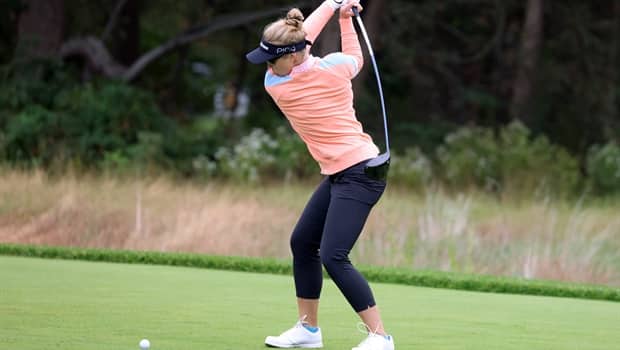 Brooke Henderson of Smiths Falls, Ont., shot a 5-under 65 to move into a tie for 2nd place, 2 shots off the lead, heading into the final round of the LPGA’s KPMG Women’s PGA Championship. 1:27

Henderson, who won the 2016 Women’s PGA Championship, tied her career-best 18-hole score at a major championship with a 65 to stay within striking distance. Henderson had five birdies for a bogey-free round.

“Sometimes it’s hard to believe that I’m a major champion,” Henderson said. “But definitely in times like this it gives me a little bit of confidence, and I’m excited to try to do it again tomorrow.” South Korean Sei Young Kim shot a 3-under 67 to carry a 2 stroke lead into the final round of the LPGA’s KPMG Women’s PGA Championship. 2:08

Nordqvist shot a 68 as she tries to win her third major championship.

Inbee Park is three strokes behind the leader and Bianca Pagdanganan shot a 65 for the second straight day to rally her way into fifth at 3 under. Pagdanganan hasn’t had a bogey since the first round.

Park is a three-time winner of the KPMG Women’s PGA Championship and would tie Mickey Wright for the most in a career with a win.

“I’d be lying if I said I don’t think about it, but it’s just too crazy to think something big like that, in the history of golf, history of this championship, is going to maybe have a slim chance of happening to me,” Park said.

Kim bogeyed the 18th hole for one of her few missteps of the last two rounds. She impressed on No. 16, nearly making an eagle but using a short putt for a birdie. She also had a birdie on No. 15, holing a long putt to go 7 under.