Teenager Caden Clark continued the torrid start to his MLS career, scoring his second goal in as many games to lift the New York Red Bulls into a 1-1 tie with Toronto FC on Wednesday night.

Clark, who turned 17 in May, marked his debut on the weekend with a spectacular volley off a corner against Atlanta. He did it again in the 77th minute Wednesday, finding the top corner with his a left-footed rocket from outside the penalty box.

Introduced in the 59th minute, Clark added immediate punch to the New York offence. The Minnesota native was riding a high after becoming the fifth-youngest MLS player to score on debut.

The Red Bulls (7-8-3) were coming off a 1-0 win Saturday in Atlanta that snapped a two-game losing streak.

Toronto’s Alejandro Pozuelo opened the scoring from the penalty spot in the 23rd minute after Ayo Akinola’s rising shot off a corner hit Dru Yearwood’s arm. It was the eighth goal of the season for Pozuelo.

Goalkeeper Ryan Meara stood rooted to the spot as Pozuelo, who upped his career MLS penalty success rate to 10-of-11, rolled the ball into the corner of goal.

The Spaniard missed one-of-two spot kicks in a 1-1 tie against NYCFC at Yankee Stadium last September. A failed attempt to pass the ball from the penalty spot to teammate Pablo Piatti in a 1-0 loss to Montreal earlier this season apparently is not considered an attempt.

Yearwood appeared to have redeemed himself in the 32nd minute with a shot through traffic that went in from a corner. But a Red Bull player was ruled to be offside and interfering with goalkeeper Quentin Westberg. 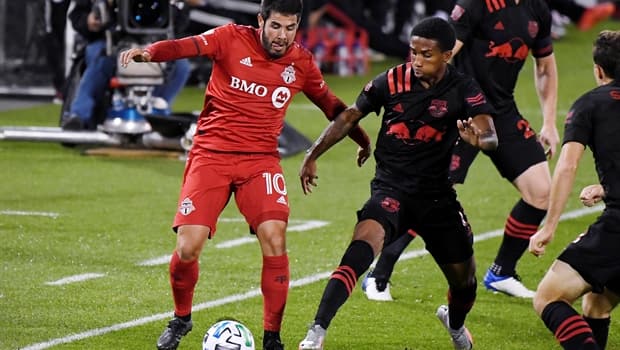 After scoring in his MLS debut on Saturday, Caden Clark records his 2nd career goal with an excellent strike as his New York Red Bulls play to 1-1 draw with Toronto FC who have their win streak snapped but are still unbeaten in 8 games. 1:17

Pozuelo had chances for more goals at Pratt and Whitney Stadium at Rentschler Field but his shots hit bodies, went wide or were saved.

Wednesday’s game was the fourth in 12 days for Toronto, which faces Atlanta on Sunday.

Greg Vanney made four changes from his weekend lineup in Cincinnati, bringing back Chris Mavinga, Nick DeLeon, Piatti and Akinola.

Newly signed homegrown player Ralph Priso made the bench. The 18-year-old midfielder from Toronto, a Canada under-17 youth international who joined the Toronto academy in January 2017, wore No. 97. He is the 25th player to sign for the first team from the academy.

Toronto FC earned their 5th straight victory and became the first team to clinch an MLS playoff spot with a 1-0 win over FC Cincinnati. 1:01

Pozuelo had a pair of early chances for Toronto. Meara made the save to deny the Spaniard in the eighth minute off a nice give-and-go with DeLeon. Pozuelo then shot wide off the ensuing corner.

Jonathan Osorio split the defence and found Akinola in the 17th minute but the striker could not get the shot away. Three minutes later, Meara parried Piatti’s swerving shot from just outside the penalty box.

Westberg made a diving one-handed save to deflect a Florian Valot shot in the 29th minute of a first half that saw 63 per cent possession for Toronto despite the Red Bulls’ trademark high press.

Pozuelo had another chance in the 53rd minute but his weak shot was easily saved. Westberg then stopped Tom Barlow from close range after defender Omar Gonzalez’s header didn’t reach his goalkeeper.

Pozuelo found Akinola with a through ball but his shot deflected off a defender. Another Pozuelo chance bounced off a Red Bulls body in front of goal in the 74rd.

Former Whitecap defender Tim Parker captained the Red Bulls with skipper Sean Davis, who returned to action on the weekend from a knee injury, starting on the bench. Austrian attacking midfielder Daniel Royer, who leads the team with four goals, came off the bench in the second half.

The two teams will meet again in the regular-season finale Nov. 8 at Red Bull Arena.

Kekuta Manneh and Teal Bunbury scored early goals, Adam Buska had a goal and an assist, and the New England Revolution beat the Montreal Impact 3-2 on Wednesday night at Red Bulls Stadium.

Manneh opened the scoring with his first goal of the season in the 13th minute, side-footing a one-touch shot into an empty net. Buska ran onto a loose ball before tapping it to Manneh for the finish from point-blank range.

Alexander Buttner chipped a high entry to the centre of the box where Bunbury scored on a header to make it 2-0 in the 20th. 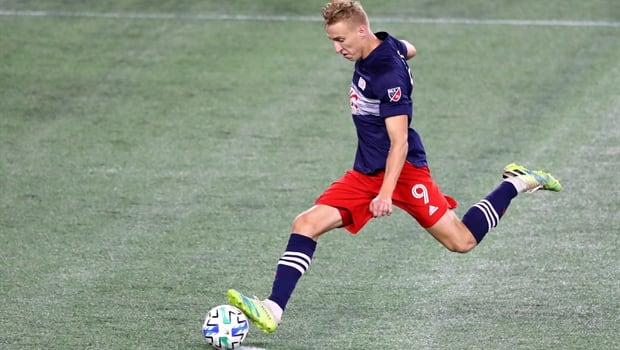 New England’s Adam Buksa scored the game-winner and added an assist in a 3-2 victory over Montreal. 1:01

New England (7-4-7) has won consecutive games and has one loss in its last seven matches.

Amar Sejdic tapped in a roller from the top of the six-yard box in the 27th minute for the Impact. Buska beat a pair of defenders before his shot was stopped by goalkeeper James Pantemis. Buska then put the rebound into an empty net in the 52nd minute to make it 3-1.

Ballou Tabla’s goal — the 21-year-old’s first since 2017 — in stoppage capped the scoring.

The Impact are playing their remaining home games in the United States due to travel restrictions regarding COVID-19 put in place by the Canadian government.