Centre Pierre-Luc Dubois, who led Columbus in goals, assists and points during the playoffs, signed a two-year, $10 million US contract extension Thursday that keeps him with the Blue Jackets through the 2021-22 season.

Dubois, who was a restricted free agent, will earn $3.35 million during the upcoming season and $6.65 million in the second year of the deal, the team said.

“I’m excited to have the contract done and to be able to get back on the ice and play hockey again, especially with everything that is going on in the world right now,” Dubois said in a statement released by the team. “I’m very fortunate and looking forward to being with my teammates at camp and the start of a new season.” 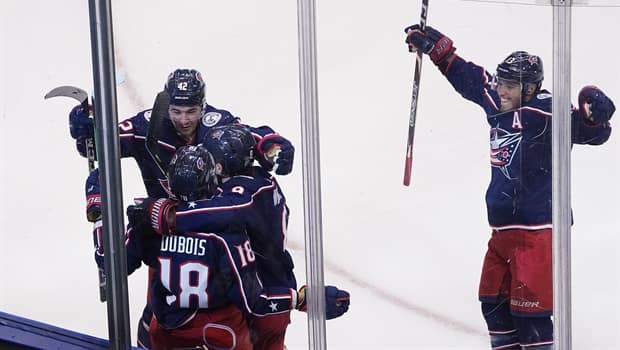 Pierre-Luc Dubois scored a hat trick, including the overtime winner, as the Columbus Blue Jackets came back from 3-0 down to beat the Toronto Maple Leafs 4-3 in overtime. Columbus take a 2-1 lead in their best-of-five series. 1:18

The third-overall selection in the 2016 draft, Dubois has 65 goals and 93 assists with 162 penalty minutes in 234 career games with the Blue Jackets since making his NHL debut during the 2017-18 season. The 22-year-old Dubois is the fastest Blue Jackets player to record 100 career points to begin his NHL career, accomplishing the feat in 143 games.

“Pierre-Luc is a talented, young player with great potential, and we look forward to his continued growth and development, and the valuable contributions he will bring to our team,” general manager Jarmo Kekalainen said in a statement.