Montrealer Felix Auger-Aliassime collapsed in heartbreaking fashion at the fourth round of this year’s Australian Open.

The 20-year-old lost to Russian qualifier Aslan Karatsev 6-3, 6-1, 3-6, 3-6, 4-6 at Margaret Court Arena in Melbourne. Auger-Aliassime held a two sets to none lead over Karatsev before losing his next three sets.

A win for the Canadian would have sent him to the quarter-finals of a Grand Slam tournament for the first time in his career.

“It’s a shame,” Auger-Aliassime said. “It’s really a shame that I couldn’t get through today. It’s difficult to swallow but it’s tennis. That’s how it is. That’s life.” 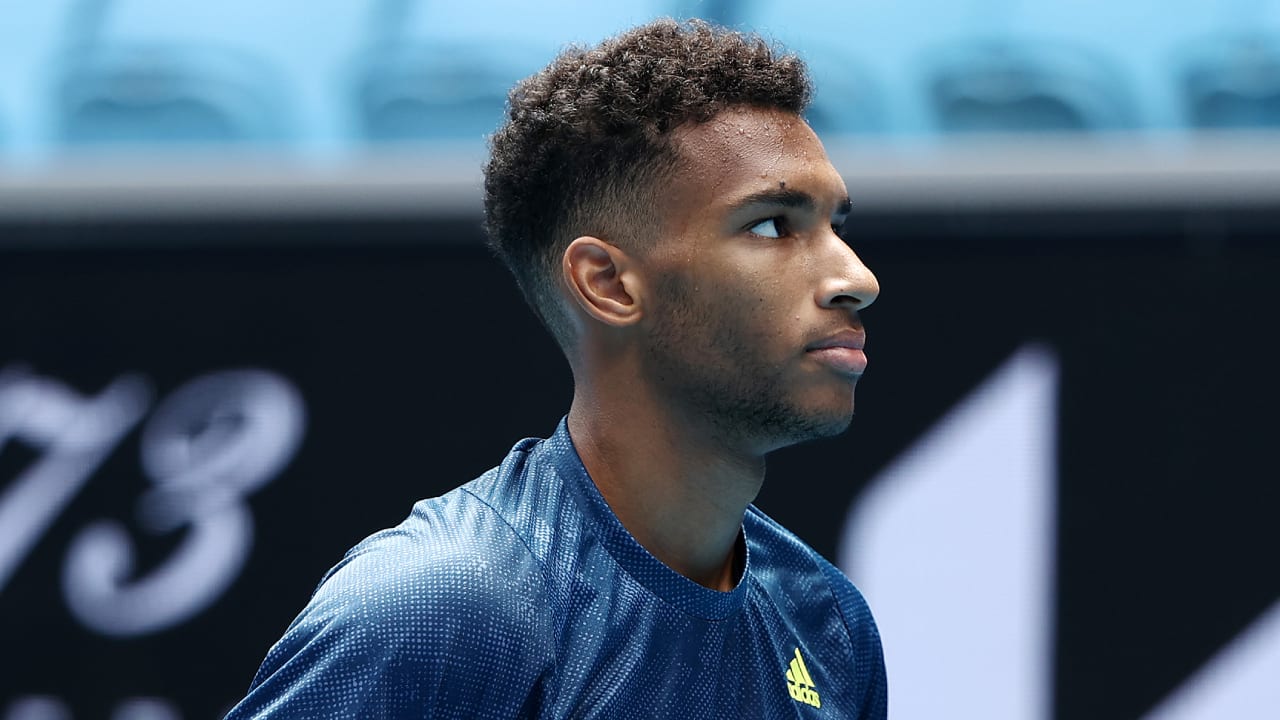 Montreal native Felix Auger-Aliassime led 2 sets to none before losing his 4th round match against qualifier Aslan Karatsev at the Australian Open. 1:30

Karatsev upset No. 8-seeded Diego Schwartzman of Argentina to reach the fourth round of the tournament. Following his victory over the Canadian, Karatsev will face off against either Austria’s Dominic Thiem or Belarus’s Grigor Dimitrov in the quarter-finals. Both players will play each other in their fourth round match Sunday.

“He played good,” Auger-Aliassime said. “Of course, I wish I could’ve served better. But, I can’t just snap my fingers and it just happens. I got to be just a better player overall to overcome these situations.”

The 20th-seeded Auger-Aliassime found himself cruising through the first two sets.

He needed 39 minutes to win the first set over the Russian qualifier. Partway through, Auger-Aliassime fought off a game point opportunity while down 0-40. The youngster won the next five points to give himself a 5-2 lead in the set.

Down 1-0 in the second set, Auger-Aliassime hit three aces to win his first game. He would then win his next five consecutive games to take the set in 29 minutes.

Karatsev would begin to mount his comeback in the third set.

Both players traded the first two points of the set before Karatsev won the next two points to put Auger-Aliassime down 4-2. The Canadian had 10 unforced errors in the third set, his first dropped set of the tournament.

Auger-Aliassime dropped the first game of the fourth set before winning his first game to tie it at 1-1. Karatsev would then win the next three games and would fire five aces before eventually winning the fourth set.

The final set was uncharted territory for both players as neither of them had ever played in a fifth set.

After dropping the opening game of the fifth set, Karatsev broke the Canadian to go up 2-1. Karatsev was up 4-2 later in the set before both players fought at deuce on six occasions for 12 minutes. Auger-Aliassime would eventually win the advantage and secure his third point of the set.

The two would each win one more game before Karatsev had three match points to put the Canadian away. The Russian only needed one to defeat the 20-year-old.

“The positive thing is, mentally, I stayed positive,” Auger-Aliassime said. “I believed until the end. Even when I was down in the fifth set I still tried, I still believed.”

The match-deciding fifth lasted 58 minutes before Karatsev pulled off the comeback win.

Canadian Milos Raonic is slated to play his fourth round match against top-seeded Novak Djokovic of Serbia later Sunday, if the latter is healthy. Djokovic says he hurt a stomach muscle during his third round victory over American Taylor Fritz. Raonic is 0-11 lifetime against Djokovic.

This was early in the second set of a competitive-as-can-be matchup in the Australian Open’s fourth round against a younger version of herself — stinging serves, huge groundstroke cuts, a fierce streak — and during a stretch when things seemed to be slipping away.

Williams quickly put up a hand to indicate she was OK, got up to retie the laces of her right shoe and, while it took her a bit to regain control, she did just in the nick of time. Grabbing the last two games, Williams pulled out 6-4, 2-6, 6-4 victory over No. 7 seed Aryna Sabalenka to reach the quarter-finals.

“I am happy to get through that one. It wasn’t easy,” said Williams, who moved closer to an eighth Australian Open championship and record-tying 24th Grand Slam singles title overall. “She was teeing off on every shot.”

Leave the subtlety, the nuance, to others. These two hit the ball hard, over and over again in Rod Laver Arena, exhibiting plenty of power. It’s just that Williams was barely better. She ended up with more winners, 30-24, and more aces, 9-4, while cranking up her best-in-the-game serve to as fast as 126 mph (202 kph).

When Williams needed to volley, she did, rather well, claiming 13 of 15 points when she went to the net. More importantly, she covered the court much in the way she did in her younger days, when opponents’ apparent winners were rendered mere fodder for her own strikes.

That left Sabalenka — a 22-year-old from Belarus playing in only her second fourth-round Slam match — visibly and audibly frustrated. She frequently would scream after lost points. She spiked her racket, too.

With the high quality of the match, the only shame was that no fans were there to see it in person. That’s because this was Day 2 of the five-day lockdown imposed by the Victoria state government after some COVID-19 cases emerged at a local hotel. (Any cheering or chatter TV viewers heard at home was being piped in to broadcasters’ feeds).

Up next, Williams is assured of facing another Grand Slam champion: Simona Halep or Iga Swiatek were to meet Sunday night.

The other quarter-final on that half of the draw will be Naomi Osaka against unseeded 35-year-old Hsie Su-wei of Taiwan.

The third-seeded Osaka returns to the quarter-finals of a tournament she won in 2019 for one of her three major trophies. Osaka ran her winning streak to 18 matches — a run that included a U.S. Open title in September — and put a stop to Muguruza’s own fine form of late.

Heading into Sunday, two-time major champion Muguruza had been broken only once in this Australian Open. She had dropped a total of 10 games through three matches.

But Osaka broke the 2020 runner-up’s serve five times on a cloudy day with the temperature in the mid-60s Fahrenheit (high teens Celsius).

“I was a bit intimidated, because I knew that she was playing really well coming into this match,” Osaka said. “In the stressful points, I feel like I just had to go within myself. And I know that today I probably hit a lot of unforced errors, but I feel like it was what I needed to do, because I couldn’t really give her any short balls because she would finish it.”

The key moment came when Osaka was serving at 15-40 while trailing 5-3 in the final set. Muguruza could not convert either of those match points: Osaka delivered one of her 11 aces at 118 mph (191 kph) on the first; Muguruza missed a groundstroke on the second.

Fifteen minutes later, the match would be over.

The 71st-ranked Hsieh’s 6-4, 6-2 victory over 2019 French Open finalist Marketa Vondrousova made her the oldest woman to make her major quarter-final debut in the professional era.

Hsieh plays with an unusual style that includes two-handed shots off both sides, and that might have flustered the 19th-seeded Vondrousova, who made 31 unforced errors, 13 more than the winner.

Valheim on PS4 and Xbox One: New update on Valheim coming to consoles | Gaming | Entertainment