Helen Nkwocha may have made history as the first female coach of a top-flight men’s team in Europe, but she does not regard herself as a trailblazer.

Nkwocha is in caretaker charge at Faroe Islands club Tvoroyrar Boltfelag, who – with just three points to their name – are already consigned to relegation.

The Faroese club, one of the oldest in the country, handed the reins to Nkwocha, who believes her background in youth coaching has prepared her for the additional scrutiny of leading a senior men’s side.

“I don’t see myself as a trailblazer, but I do know that there is a different level of scrutiny,” Nkwocha told Sky Sports News. 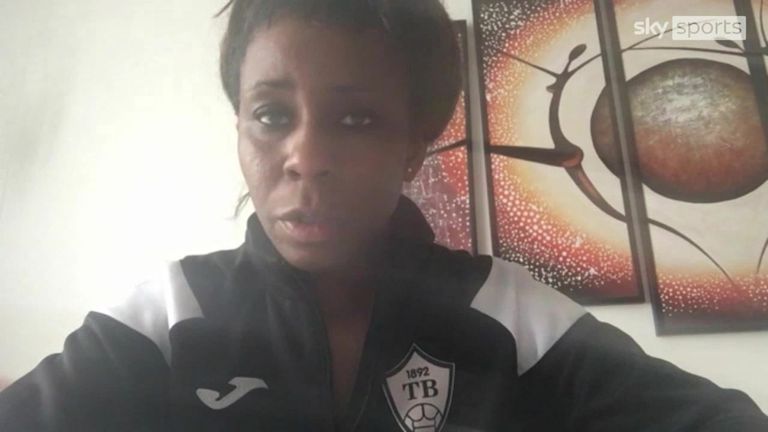 “It is a wonderful opportunity that you have to get paid to do your hobby. As a coach that is great.

“I just see it as me trying to do what I really enjoy doing and trying to be really good at it – and being ready for the scrutiny which you will get.

“I am aware that there is a profile, an expectation when people are aware there’s a female coach, a Black coach.”

Her high-level coaching certificate, which she says is on par with first-team coaches, saw her rewarded with the opportunity to lead the club through the remainder of their season.

Nkwocha, who has previously coached in the United States and China, is hopeful her experiences can inspire more female coaches.

However, she credits her career path as being down to her work ethic and ability, not anything else, and praised the mindset of her employers Tvoroyrar Boltfelag.

“I think it is an absolutely fantastic testament to the mindset of the people that have employed me,” Nkwocha added.

“They employed me to work with their young players and if they didn’t have that mindset they would be looking for similar [coaches] to what they had before.

“It made sense, it was just a case of people recognising how open-minded the club is.

“That’s what the discussion has been, ‘oh it’s a woman’. To the club, I don’t have think they have that perception. They just see a coach.”