There was a party atmosphere ahead of kick-off at St James’ Park on Sunday as the Newcastle fans welcomed their new owners into the directors’ box.

However, with non-executive chairman Yasir Al-Rumayyan looking on, Steve Bruce’s team fell to a 3-2 defeat to Tottenham and are still without a Premier League win this season.

Bruce had been expected to be sacked in the build-up to the match following the club’s £305m takeover earlier this month but new part-owner Amanda Staveley said Newcastle wanted to be “patient and considered” in their approach and that “change doesn’t happen overnight”.

Despite the optimism around the club following the takeover, a recent Newcastle United Supporters’ Trust poll revealed that almost 95 per cent of fans wanted Bruce’s dismissal. However, there has been no clarity regarding how the new owners want to move forward with the managerial structure and as it stands, Bruce will take charge of their match at Crystal Palace on Saturday.

Neville, who admitting sacking managers is an inhumane thing to do but comes with the territory of being a football club owner, thinks the Newcastle board’s treatment of Bruce has been disappointing.

“I think this situation with Steve Bruce is totally wrong,” he said on Monday Night Football.

“If this was any other industry, it will be classed as employment abuse as the employer would be in serious trouble. You have got to demonstrate decency – that’s not just the new owners at Newcastle, it’s the ones before who had him as a lamb to the slaughter or an umbrella to stop the rain coming on their heads.

“Think about it in your own walk of life – if you’re a lawyer, or an accountant or an electrician and you are being treated like this. Think about all the things that have happened in the last few weeks, the leaks, it is not fair on a brilliant man. A brilliant football man. A great player. A manager who has had 1,000 games – he deserves to be treated with decency.

“Steve Bruce will get the craic – if you are going to sack him, pay him up the full money, don’t resist it, do the right thing and move on. If you aren’t going to sack him, tell him and be clear so at least the fans can start having a go at you. Stop using Bruce as a shield for criticism at your football club.” 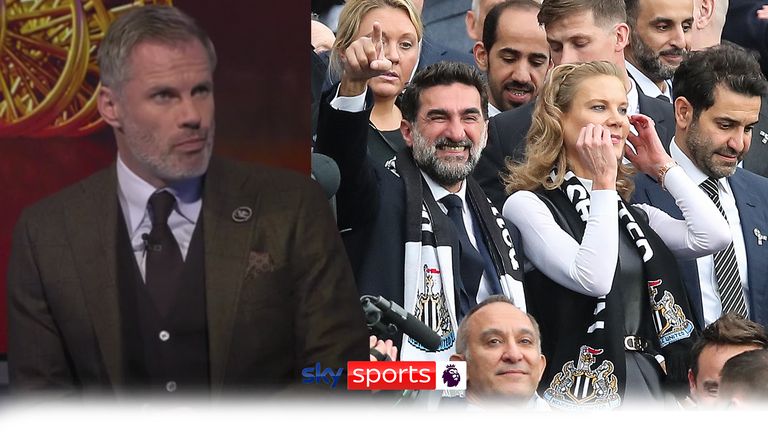 Jamie Carragher feels that Newcastle are one of the worst teams in the Premier League and a lot of work is needed to keep them up, despite the recent takeover of the club

Bruce criticised the media for their reporting on his future in his press conference on Friday with the information coming out of the club implying that he would not be in charge for the Tottenham game.

Carragher believes journalists reporting that story must have been briefed by someone at the club in exchange for some positive PR in the future regarding the Saudi-backed ownership. He feels that isn’t the right way of going about business at an elite football club.

“I think the ownership have had a really poor week,” he said.

“Newcastle supporters are delighted but the club have messed up the managerial situation. If you wanted to sack Steve Bruce, sack him. That was a mess.

“Also, they’ve got a lot of criticism in the press for human rights issues so what they’ve done is try to curry favour in the press with local journalists who know the area well. Feeding them information about how they are going to sack Steve Bruce. You don’t tell people a story like that about a man like Steve Bruce who has been in the game 25 years.

“If he’s getting abuse off the Newcastle crowd, that’s fair game, but an ownership shouldn’t be coming in and feeding stories. It’s a rocky road. As for when Steve Bruce goes, the journalists will be asking them questions about who is coming in next, and what about when that manager goes through a bad spell? They will always want to be drip-fed that information. You should come in as a proper organisation and run the business right from top to bottom.

“If that means getting rid of Steve Bruce, do it, and do it now or tomorrow. I just think the way they’ve gone about it hasn’t been a great start.”