Who is red-hot in the Premier League right now? Sky Sports ranks every player over the past five matchdays…

Liverpool trio Mohamed Salah, Roberto Firmino and Sadio Mane are the most in-form players in the Premier League right now, according to the latest Power Rankings chart.

Salah retained his place at the summit with another breathtaking display in Liverpool’s 5-0 win at Watford, with Firmino netting a hat-trick of poacher goals and Mane scoring from range to inscribe his name in the elite ‘100 Club’.

Pierre-Emile Hojbjerg (No 4) recorded team-topping numbers for touches, passes, duels won, recoveries and tackles during a 3-2 win at Newcastle – with team-mate Heung-Min Son (No 10) among the scorers.

How are the Power Rankings calculated?

The Power Rankings are based on points awarded to players for 35 different statistics – from goals and assists, to blocks and tackles. The standings take into account the number of points a player has earned up to the previous five matchdays of a season, with each previous game worth 20 per cent fewer points in incremental deductions.

Jamie Vardy (No 5) scored his seventh league goal of the season to keep pace with Salah in the goal chart during the 4-2 win against Manchester United, with team-mate Youri Tielemans (No 9) scoring a stunning lob. 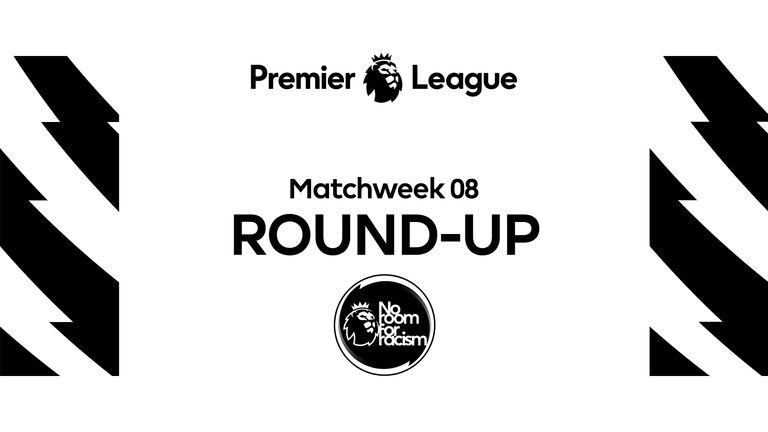 A round-up of all the action from matchweek eight in the Premier League as Arsenal hosted Crystal Palace, Tottenham travelled to Newcastle and Chelsea faced Brentford

Brighton stopper Robert Sanchez (No 6) climbed the chart with a second successive clean sheet in a goalless draw at Norwich, while Manchester City’s Kevin De Bruyne (No 7) and Aston Villa’s John McGinn (No 8) were among the top performers.

In terms of each club’s form player, one full-back, three goalkeepers, three centre-backs and five midfielders top their respective clubs – with the rest being forwards.