Savannah Marshall punches harder than any of the world’s top female fighters and would welcome a “war” with Claressa Shields, says her trainer Peter Fury.

Marshall swiftly overpowered Lolita Muzeya in the second round to defend her WBO middleweight title at the Utilita Arena in Newcastle on Saturday night.

Muzeya had instigated brutal exchanges in the opening round, allowing Marshall to display her ruthless instincts.

“It was brilliant what she [Muzeya] done, because she lit a fuse and she saw what happened there,” Marshall’s trainer Peter Fury told Sky Sports.

“The good thing with Savannah, she can keep that pace going. Even if they had a war for four or five, six, seven [rounds], it would have been the same thing.

“Savannah Marshall can keep that kind of activity and aggression going, which is very rare.

“The reason why she can maintain that pace and keep those ferocious punches coming is because she does it with ease. She’s not forcing anything, she’s got that natural ability where those shots come winging in with natural power.

“It was a faultless performance and again we got to see the devastating power of Savannah.”

The unbeaten Brit is set to share the ring with Shields, a two-time undisputed champion, but Fury believes that Marshall already stands out as the most destructive puncher in women’s boxing. 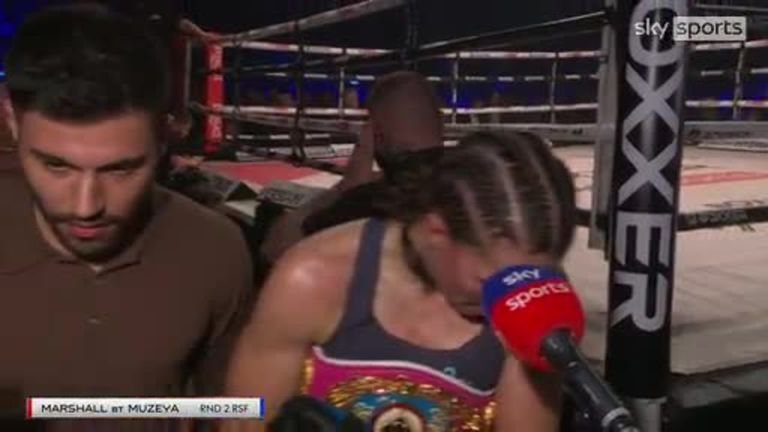 Marshall and Shields traded words ahead of their planned grudge fight

“Everyone has got their own fabulous technique. Katie Taylor is magnificent, she’s a top fighter,” said Fury.

“But name me a woman in any division that has got punch power and can box? When Savannah gets you going, you’re not getting off. She has got that instinct to do damage.

“I don’t know anybody in any other division that’s like Savannah.”

Shields will make her UK debut on the same BOXXER bill as Marshall on December 11, live on Sky Sports.

If the fierce rivals emerge victorious then they are expected to settle their long-running feud early next year.

“We’ll get a look at her, up close and personal. It’s going to be a fantastic evening,” said Fury.

“There’s going to be fireworks on December 11. Can you imagine those two in the same building?

“Claressa Shields is tough and she belongs where she is. That’s going to be a very good fight.

“I’m sure Claressa Shields is one tough customer as well. It’s a different fight, a different ball game. I’m just excited about it. That’s what makes this fight so exciting. It’s a 50-50 fight.

“Claressa Shields hasn’t got terrific punch power, that’s for sure, and Savannah has. But Claressa has got very fast hands.