England have been ordered to play one UEFA competition match behind closed doors, with a further match suspended for two years, in relation to the July 11 disorder surrounding the final.

Questions have been asked about how it will affect any bid for the centenary World Cup.

But the chief operating officer of UK Sport, which is involved in an ongoing feasibility study on whether to bid, said his view was that it had not derailed plans.

Simon Morton told the Digital, Culture, Media and Sport committee: “I was at the match, it was pretty horrific and it was the opposite of what we want big sporting events to feel like.

“However, I don’t think it’s reflective of how this country organises sporting events. We have an excellent reputation, not only for hosting brilliant events but also hosting safe and secure events.

“We have to get the balance right here. It was unacceptable, but I think most countries around the world would recognise it is not reflective of what normally happens.

“In respect of the bid, I think the only thing I can say there is the UEFA president (Aleksander Ceferin), who is a key person in respect of the process, has been on the record saying it will have no bearing whatsoever on our bid.

“There are lessons to be learned, the FA has commissioned a review from Baroness Casey. It’s very serious. But I do not think it is the bid up in smoke.” 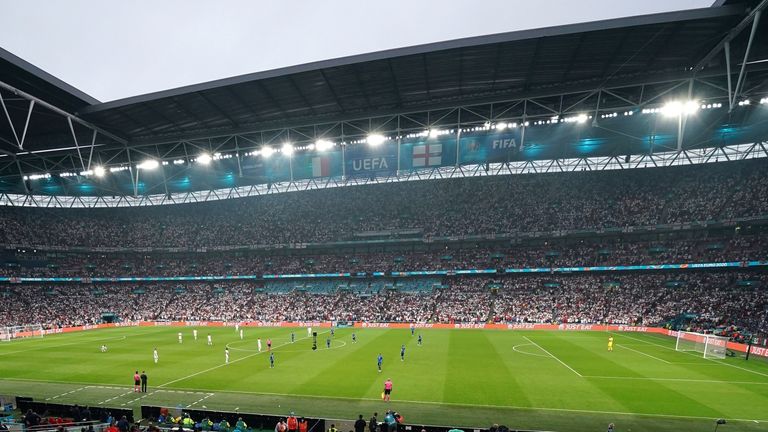 Morton was asked for his view on biennial World Cups – something which FIFA is currently consulting on.

“What I would say about the general landscape of the sporting calendar is that we are concerned about the oversaturation of sporting events from an athlete welfare perspective,” he said.

“One of the reasons why sport is so popular is because of its scarcity. I think when we host events, you want to know that that’s special, because you’re attending the world championships.

“If there were 10 world championships a year, would it mean so much to the public? I don’t think that it would.

“It’s important when a member of the public goes to a world championships they know that they are watching the best athletes in the world.

“One of the risks at the moment of the increasing volume of sporting competitions is that we may see in sport a number of rival or splinter schisms emerge across those, a little bit like in darts or boxing, you’re not quite sure which belt they’re fighting for.

“So I think the oversaturation of sporting competition events is a real risk.”

Downing Street insisted the 2030 bid was “very strong” despite the chaotic scenes at Wembley.

Asked about the impact of the Wembley trouble on the 2030 bid, the Prime Minister’s official spokesman admitted “important lessons need to be learned” but added: “Our reputation for staging world-class sporting events is strong. Next year we’ll host the Birmingham Commonwealth Games, the women’s Euros and the Rugby League World Cup.

“A combined UK and Ireland World Cup bid for 2030 would be a very strong contender.”

Morton said the five nations’ approach had been “genuinely collaborative”, and said: “This process has led us to begin exploring other mega events that can be co-hosted across the devolved governments, and there are two or three that look very promising.”

Pressed on this comment later in the hearing, Morton said he could not disclose in a public forum which events were being looked at but could share the information privately with the committee.

DCMS committee chair Julian Knight asked Morton whether fundamental reform of the English FA was a prerequisite of making a bid for 2030.

“That will be a judgement ultimately for the Government but my view would be that it’s not a prerequisite,” Morton said.

He was asked whether all five bidding countries would be able to qualify automatically for the finals as hosts.

“It’s under discussion. We don’t know how many spaces or berths FIFA would provide,” he replied.

“The bid guidance isn’t going to be released until quarter one of next year. Only once those are seen can the five football associations agree between them how they would resolve (it) if there was a smaller number than five.

“I think there’s a general consensus, but there is some fine-tuning to do on that.”

Asked what the options are, Morton said: “Hypothetically, you could draw lots, you could look at world ranking. You could have play-off matches between the countries. You could hypothetically come up with lots of different scenarios.”