Everyone asked about the fit and whether it would work. Obviously, it is just one game but the signs did not look good for Russell Westbrook as part of this Los Angeles Lakers team.

The former MVP shot just 4 for 13 for eight points in his Lakers debut, with five rebounds and three assists as his new team lost 121-114 in their season opener against the Golden State Warriors. Very poor production for a man who had 38 triple-doubles last year.

Of course, it would be ridiculous to use a single game to determine whether or not the acquisition of Westbrook will prove a successful one for the 2020 NBA Champions but many of the concerns raised by pundits following the trade back in August were evident.

Westbrook struggled shooting, as he always has. He also, predictably deferred to LeBron James as the main playmaker and the Lakers playing style failed to use his speed and tenacity to its full potential.

“We want him to be himself,” Davis said of Westbrook, but will that be possible in this team which already has players who can do the things he can, therefore neutralising his efficacy?

The move to the Lakers provides a chance for Westbrook to cement his NBA legacy. Coach Frank Vogel believes it will just take time for him to get used to his new team.

“Him more than anybody, it’s going to be an adjustment period,” Vogel said. “He’s coming into our culture, our system, he’s the new guy, he’s got to find his way.

“It’s difficult, when you’re used to being the guy that has the ball most nights, to be able to play off others like LeBron and AD. It’s just a little bit different for him. He’s going to be great for us but it’s going to be an adjustment period.”

Perhaps the answer is to move Westbrook to the second unit where he would obviously become an immediate Sixth Man of the Year contender given the way he stuffs the stats sheet.

On Inside The NBA, Charles Barkley said: “He was too passive in my opinion tonight. He’s got to play with a ton of energy.

“I would play Russ with the second unit and speed them up and make them play full court, because in the half-court you’re going to go to LeBron and AD, because they’re the two best players.

“Put him out there with the second unit and let them play much faster.” 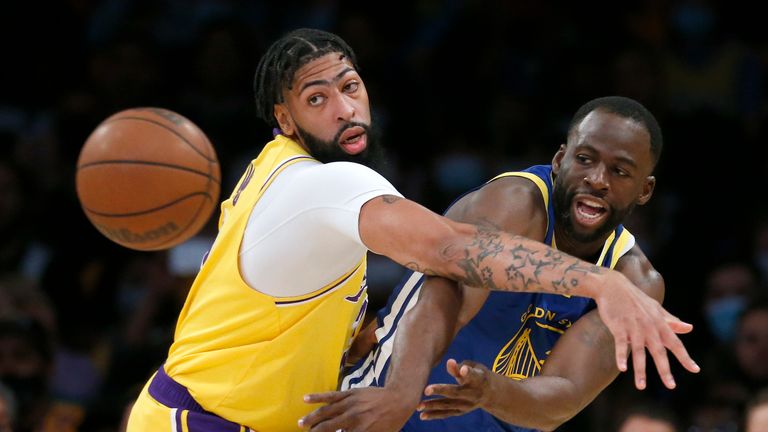 Westbrook, a Los Angeles native, was clearly disappointed after the game.

“I told Russ to go home and watch a comedy,” James said. “Put a smile on his face. Don’t be so hard on himself.”

Regardless, Westbrook will eventually become more comfortable as a Laker, but the ceiling of the team may well be determined by just how well he can acclimate into his new surroundings.