Claudio Ranieri had been sat down in his office at Watford’s London Colney training ground for 10 minutes when he had already seen enough.

Liverpool burnished their title credentials at Vicarage Road but for the man in the opposite dugout, a replay of last Saturday’s 5-0 drubbing was proving too hard to stomach.

It has been a baptism of fire for Ranieri, who argued it was out on the training pitch, not through excruciating video analysis, where drastic improvements would be made.

FREE TO WATCH: Highlights from Liverpool’s win over Watford

The affable Italian suffered his biggest Premier League loss during his first match in charge, while no manager whose first game with a club in the competition came at home has suffered a bigger margin of defeat.

Kiko Femenia was part of a retreating defence, and he has been licking his wounds both figuratively and quite literally since that chastening afternoon.

The full-back suffered a knock during one duel with Andrew Robertson and remains doubtful to face Everton this weekend, with the player confirming he will undergo tests before the squad travel to Merseyside.

Femenia is improving day by day, and he believes so will the team as a whole as Ranieri looks to implement his ideas in his new surroundings. 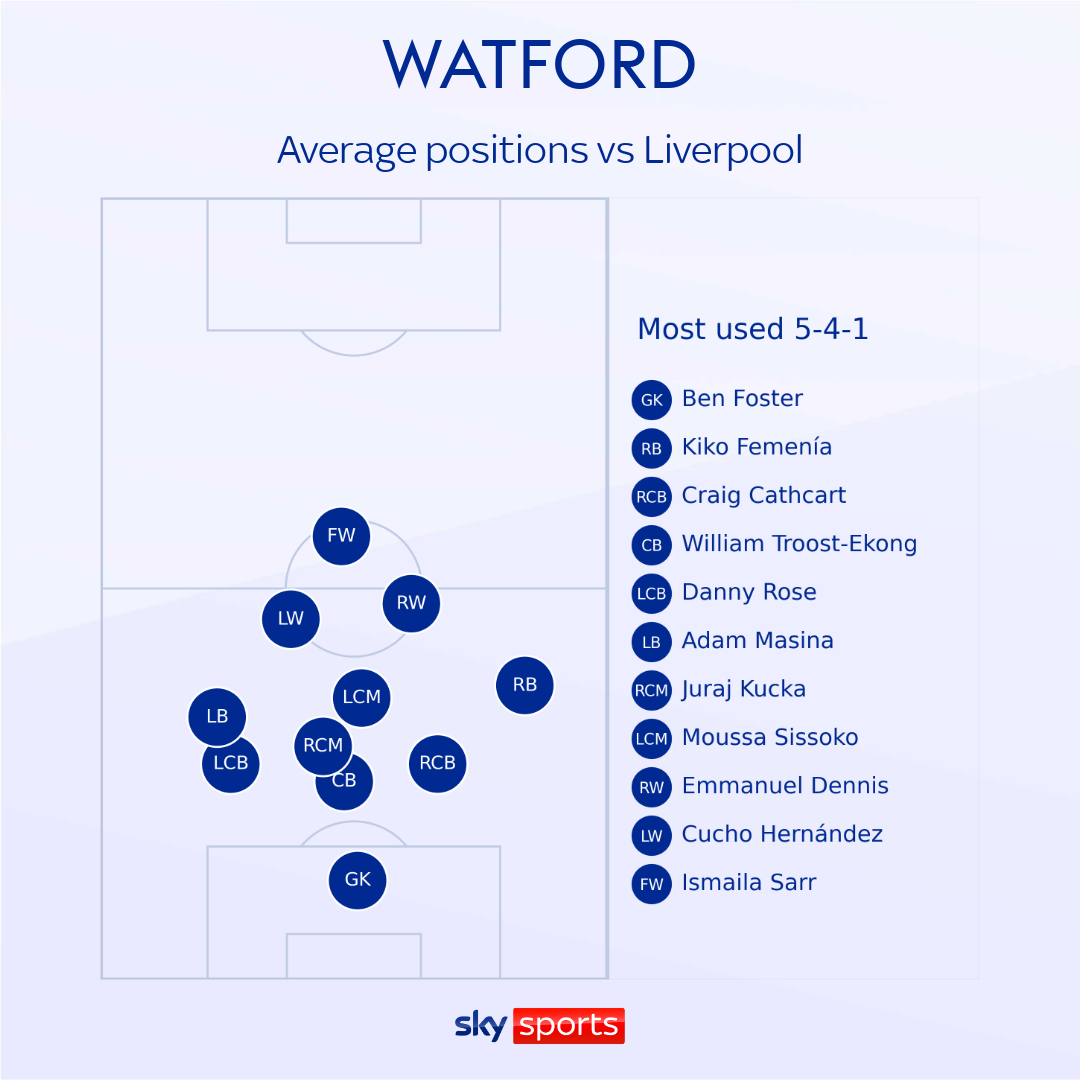 “The team remains confident,” Femenia exclusively tells Sky Sports as he reflects on the first full week under Ranieri.

“Obviously, no one likes to get beaten 5-0 at home but we know we didn’t demonstrate our best image in this game. We were up against a very good side whose qualities are well known so we’ve not allowed the result to affect us too much.

“We’ve turned over a new page, and our focus is fully on beating Everton this weekend.

“They too are a massive club and therefore will be another big test for us. They have been having a very good season so we know what to expect. We will go into the game prepared and our goal as always is to collect three points.” 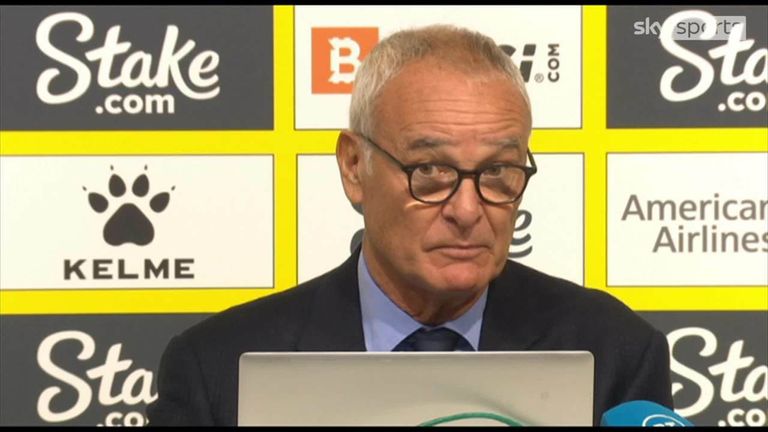 Watford head coach Claudio Ranieri says he knew before taking the job that ‘hard’ work was required, following a 5-0 defeat to Liverpool in his first match in charge

Ranieri is settling into the 22nd job of a colourful career in the dugout which started in 1986.

The fairytale of Leicester’s Premier League title win is the pipedream of optimistic Hornets while those who were underwhelmed by the club’s decision to twist and not stick with Xisco Munoz are fearful of a repeat performance of his doomed spell at Fulham, where he was sacked after just 106 days in February 2019.

Ranieri subsequently returned to his hometown club Roma having answered Francesco Totti’s call for help. By the end of the 2018/19 season, they narrowly missed out on finishing in the Champions League places despite a nine-game unbeaten run.

Since his last job in England, Ranieri has also steadied the ship at Sampdoria, restoring his reputation back in his native Italy. Femenia has been impressed by his new manager, believing the Tinkerman is the right man to stabilise the club.

“Claudio’s DNA as a manager is very clear,” Femenia continues. “He likes his teams to play with a lot of intensity and aggression. He views this as key to being able to compete at this level and we have bought into his ideas already.

“He’s an experienced head coach who knows what it takes to win matches. He and Xisco both think in very different ways. Each have their own philosophy and right now we hope to adapt to the philosophy of Claudio.

“We’ve only been with him for a matter of weeks but step by step we will take on his messages and the results will follow.”

Having been so masterfully outmanoeuvred by Jurgen Klopp, Ranieri must now devise a plan to kickstart his reign at Goodison Park on Saturday.

The Hornets were promoted from the Championship last season but are going through a transition and remain somewhat of an unknown quantity in the Premier League.

History would suggest they can head north with confidence having won three of their last eight league games against Everton – more than they had in their first 18 such meetings with the Toffees – but the high turnover of players and managers makes clinging onto good omens rather tenuous.

Ranieri is Watford’s 14th different change of manager since Pozzo family took control of the club in June 2012. Femenia is accustomed to the culture at the club, and accepts the role he must play in helping his new boss integrate.

“Clearly in terms of creating stability, each coach brings with him his own ideas and here we’re asked to adapt quickly but this is the route the club wish to pursue,” he admits. “It’s what is demanded of us. 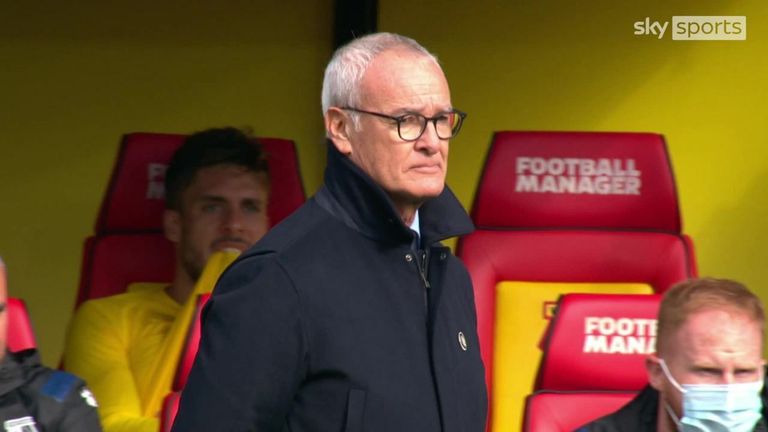 “It’s up to us to adapt as best we can to the situation. We have to support Claudio and capture his ideas as quickly as possible to have a good season.

“Ahead of the game against Liverpool, it’s true he told us he would give us an extra day off during the week if we beat them. Unfortunately, this didn’t happen but it’s good that the incentive is there.

“He is always looking at ways to set the players targets in order for us to meet our objectives. If it makes us play better then it’s a good idea. These are the types of traits you like to see in your manager as it helps forge a strong mentality.”

‘Sarr can be the difference-maker’

Scoring goals has been an issue for Watford, who have had fewer shots than any other side in the Premier League this season (76), while they also have the lowest expected goals total so far this term (6.1).

Indeed, 41 per cent of the Hornets’ xG this campaign came in one game against Norwich (2.5), which is the only match in which they have had an xG of more than one.

There has been an over-reliance on the form of Ismaila Sarr, who has had 26 per cent of Watford’s total shots in the Premier League (20/76), the highest ratio of any player in the competition so far this season.

Femenia believes keeping Sarr fit and firing is crucial to the club’s hopes of consolidating their top-flight status.

“Ismaila is very fast and has a lot of power. He’s someone who is highly thought of clearly in the dressing room. We know that we can count on him for his goals and assists but we can’t rely on just one individual.

“He’s someone who judges himself on scoring goals, as we saw in the Championship [Sarr scored 13 league goals last season] and he’s a player who makes a big difference for us.

“We have to create the right environment in order for him to flourish but we have got some very good players – not just him. It’s true that he’s in a very good period of form so we have to provide him with good service.

“He’s capable of destabilising opponents, especially in one-on-one situations, and it’s true that we are expecting a lot from him this season because we know about his qualities.”

‘Beating Everton would be perfect gift’

During his final game as caretaker, a 2-1 win over Parma, Roma’s ultras unfurled a banner which read, “Mr Ranieri, you were there for us in our hour of need. Now your people pay tribute to you.”

At Sampdoria, the side sat bottom of Serie A when he took charge in October 2019 but Ranieri brought purposeful and practical football and they would ultimately finish in 15th place, followed up with a ninth-placed finish the following season.

On Wednesday, he turned 70 – a milestone that marks him out as the oldest current manager in English football after Neil Warnock, who is 72. The Watford head coach admits he now sleeps better after defeats in his old age, but his appetite for success remains insatiable. 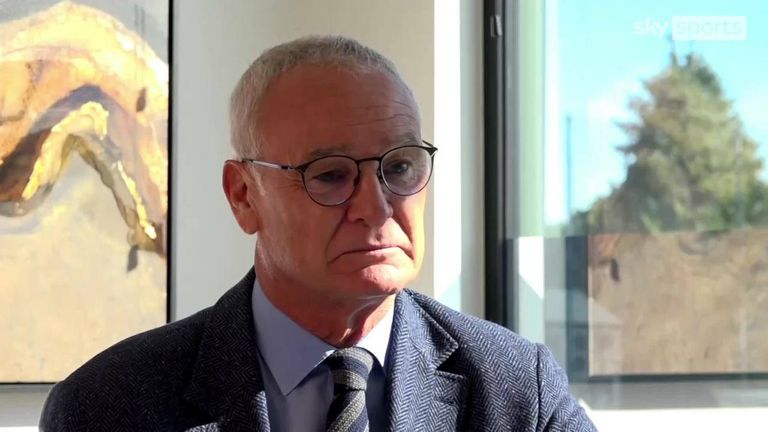 New Watford head coach Claudio Ranieri explains why he was so keen to return to the Premier League (Pictures: Watford FC)

Ranieri wittily revealed a trip for dinner is on offer should Watford win for the first time in their history at Everton this weekend – albeit in the club canteen.

“We have not got him a birthday present yet,” Femenia somewhat ruefully responds. “He’s still young and beating Everton would be the perfect gift.”

Watford have an arduous, uphill struggle ahead, but in Femenia, Ranieri has a man braced for his latest rescue mission.

Follow Everton vs Watford in our dedicated live match blog. Highlights will also be published on the Sky Sports digital platforms and the Sky Sports Football YouTube channel from 5.15pm on Saturday.