Marvin Bartley says fans who applauded when players took a knee in Livingston’s first game of the Scottish Premiership season against Rangers “will never understand how much it meant”.

The Livingston captain, who is also the Scottish Football Association’s Equality and Diversity Advisor, continues to act as a leading voice on combatting discrimination and promoting anti-racism.

Bartley admitted he was nervous prior to the season opener at Ibrox with it being the first weekend that saw fans return to stadia in the Premiership after the easing of coronavirus restrictions.

Boos and jeers had been prevalent at several Euro 2020 matches when players performed the anti-racism gesture, and Bartley felt concerned fans would not show their support for taking a knee at the start of the 2021/22 campaign in the Scottish top flight.

I was extremely nervous about taking the knee today with fans in the stadium! The Rangers fans were absolutely fantastic during it and they should be applauded massively because if it had gone the other way headlines would have been written. I thank you all, truly uplifting! ❤️

In conversation with Rangers skipper James Tavernier, Bartley told Sky Sports News: “The only time I’d seen players taking a knee was down in England when they had ‘Project Restart’. A few clubs’ fans down there had booed it and at the Euros even more fans were booing it and it was very difficult for me to sit at home and watch that.

“It was hurtful because I knew why the players were doing it, I knew what people were trying to hide behind and they were trying to muddy the water even though every single player said their reason for it.

“It was the first game of the season, the first game back with fans and I was extremely nervous I probably had a couple of sleepless nights if I’m honest.

“When I went down to take a knee and heard people applauding, that is the most important applause these people will ever make in their lives.

“I don’t care whether it’s someone getting married or Rangers winning the league, whatever it is, that was the most important one that people will ever make.

“They will never understand just how much that meant to us as players but also us as Black men.” 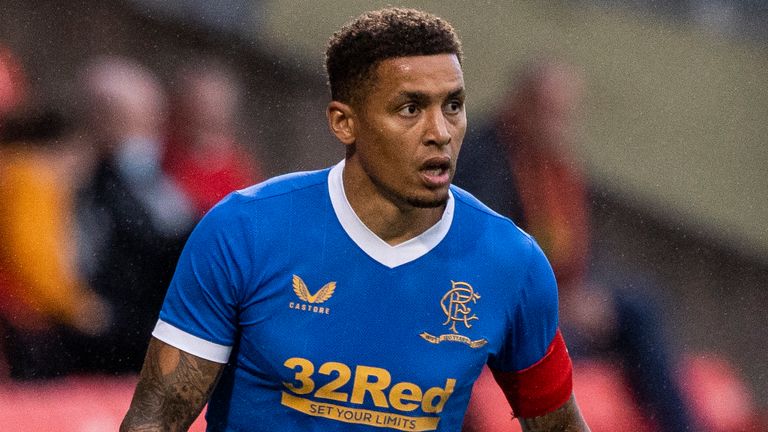 ‘I was so infuriated by racist message’

Tavernier candidly discussed the emotions he felt after receiving a racist message on social media while on a journey to Rangers’ training ground.

The 29-year-old wrote a letter to ‘Gers supporters before the beginning of the campaign, urging them to give their backing to players taking a knee, in which he outlined its purpose as a “symbolic gesture against racism, nothing more and nothing less”.

After racist abuse suffered by his team-mate Glen Kamara during a Europa League fixture against Slavia Prague last term, Tavernier revealed that every Black player in Steven Gerrard’s squad had experienced racism over the course of the campaign.

Of the most recent incident, he said: “The first thing that caught my eye was obviously the monkey emoji. I clicked on it and it was basically someone getting at me for the colour of my skin and how bad of a player I am.

“I was on my way back on the coach to the training ground at the time and I didn’t show anybody. It was one of those moments where I was so infuriated, it was burning inside me.

“I never replied back to that person, I wanted to but I don’t know whether I’d have been able to control what I would’ve said.

“The best thing for me was just to put my phone to one side and just forget about it.”

Tavernier and Bartley were speaking during Show Racism the Red Card Scotland’s week of action. Watch the extended feature on Sunday ahead of St Mirren vs Rangers live on Sky Sports Football from 11am.

Sky Sports is committed to making skysports.com and our channels on social media platforms a place for comment and debate that is free of abuse, hate and profanity.

If you see a reply to Sky Sports posts and/or content with an expression of hate on the basis of race, sex, colour, gender, nationality, ethnicity, disability, religion, sexuality, age or class, please copy the URL to the hateful post and screengrab it and email us here.