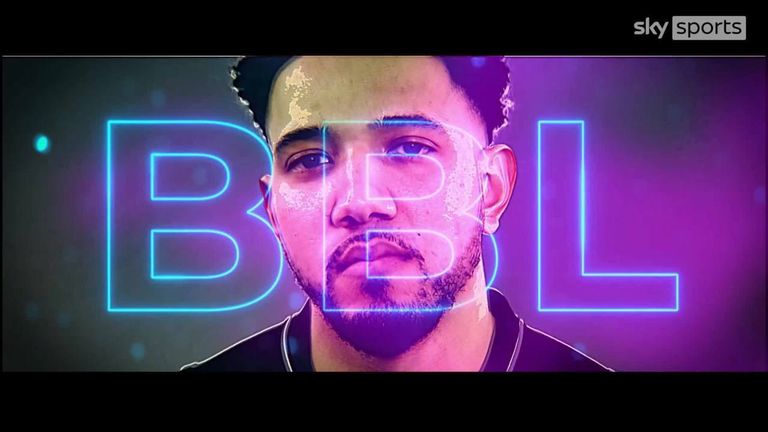 The 2021 season of the BBL is back and you can watch it on Sky Sports every Friday, starting on 29th October

The 2021 season of the BBL is back and you can watch it on Sky Sports every Friday, starting on 29th October

As the 2021/22 BBL Championship season gets underway, Sky Sports analyst and former Team GB international Kieron Achara breaks down his title contenders, MVP candidates, teams to look out for and some of the new faces looking to make a splash.

The Leicester Riders tip off the defence of their league crown behind reigning MVP Geno Crandall as they take on the playoff and BBL Trophy-winning Newcastle Eagles, led by last season’s points leader Rahmon Fletcher, live on Sky Sports this Friday.

Vince Macaulay’s London Lions will juggle domestic ambitions with their FIBA Europe Cup involvement, while there is change elsewhere in the league following the withdrawal of the Worcester Wolves and the introduction of the Plymouth City Patriots, formerly known as the Plymouth Raiders.

“When we look at Newcastle (Eagles), they’ve got off to a terrible start in the Cup, they’re already out of the Cup but it’s Newcastle. You always know they’re going to come back stronger. They’ve already made one change in their team, they’ve had a depleted squad, COVID is still lurking and it’s had an impact. I expect them to be up there in that top four.

“Obviously Leicester (Riders) are such a well-oiled machine, it seems like every year (head coach) Rob Paternostro is doing a great job of making sure that they’re playing Leicester basketball so they’re definitely one of the favourites.

“London Lions are, for me, a better team than they were last year. They look a lot more focused, a lot more consistent, they’re scoring baskets but they’re also playing high-level defense. I think through the Cup run so far they’re the second-best defensive team after Leicester.

“So London, Leicester, Newcastle are there. But that fourth spot, it’s so competitive. I’m looking at Glasgow Rocks, they’ve made a resurgence and have a brand new point guard in Jordan Johnson, they’re looking really good and Gareth Murray has done a great job there. You’ve got Cheshire competing, Manchester Giants playing really good basketball, Bristol look strong. That fourth spot I think is completely open. That three/four position is so interchangeable at this moment in time so I think it’s going to be an extremely competitive season.”

“For me, there are two. I’ve obviously got a lot of bias, I’m looking at the Glasgow Rocks, if their point guard can stay healthy, the way they’re playing, Jonny Bunyan is shooting the ball at a really good rate, Ali Fraser has returned there, they’ve got some great defensive prowess and Jordan Harris has done a great job showing his length and athleticism. They’ve recruited really well so I see the Rocks in the mix.

“The other team for me is Manchester (Giants). The addition of Dan Clark has changed the element of the game. He’s such a versatile player, can shoot three, very experienced and has played at a really high level as GB’s most prolific scorer. Then you’ve got the power of Martaveous McKnight, you’ve got Jamell Anderson there who has done a great job. I think what Manchester Giants are doing, they can definitely compete for silverware this season.

“I would say for me, those are the two teams that have really stood out to me during the BBL Cup run and showed they are ready to compete with the big boys. It’s quite a funny way of looking at things because neither of those teams made the playoffs last year. It’s just a really interesting dynamic.”

“I’ve always said this league is very much a guard league and that’s me being a big man in this league and saying it’s a guard league. The guards have always been the leaders that are complete game-changers and they’re the ones that are going to push them over the edge. Obviously, (2020/21 MVP) Geno (Crandall) does what he does, but Isaiah Reese has come in in London dropping dimes and scoring wherever he wants to, so he’s definitely up there.

“Jordan Johnson from Glasgow Rocks is another quality guard. I loved (Jamell) Anderson as well, he went a little cold from a scheduling perspective but I know what he’s got in him. There is definitely a lot of great guard play coming in that I think one of those will tip the scale and win the MVP battle.

“I didn’t even mention Rahmon Fletcher (Newcastle Eagles) from an MVP perspective, he’s obviously in the mix every year, you actually take that for granted.”

New signings to look out for

“I just saw Sheffield signed (Rodney) Glasgow who used to be at Newcastle Eagles, he hasn’t played a game but he has that Rahmon Fletcher-esque type ability. He’s somebody who can be a real game-changer.

“The one player I’ve been really impressed with from a playing perspective is Isaiah Reese. He’s really stood out to me and I think he’s going to be that player that everybody is going to want to watch and is going to bring a lot of entertainment to the BBL this season.”

Star in the making?

“I’ve been following some of the younger guys who are now becoming, quote unquote, ‘older guys’. I love Denzel Ubiaro, he’s had to really step up his role. He made a big dent last year with Plymouth Raiders, and now with the (Plymouth City) Patriots he’s got a leadership role in that position and he’s handling it really well.

“Ubiaro is a player I really love to watch. I’ve said it numerous times that I believe he’s a player that could play at an even higher level, I don’t know what his commitment is in terms of other things off the court, but he’s a player for me I love to watch and hoping to follow him more this season.”

Which teams have something to prove?

“From a London perspective, I think London always have something to prove. Coach Vince (Macaulay) will say there is no pressure, but there is. They are expected to win. But what I think they’ve done this season thus far is, for one, COVID has still affected them but they’ve been able to be more steady.

“They’ve still got Justin Robinson out, an MVP calibre player still to return to this squad, so they have so much depth. They’re handling that situation better, they’ve got that chip on their shoulder now, using it as fuel to motivate them every game.”

“As for Plymouth, it’s a tough season, we didn’t even know whether they were going to have a team. They’ve assembled a team at short notice and to be there from a Plymouth perspective, their focus is probably on surviving and competing, anything else is a bonus.

“I saw a couple of their games earlier on this season, I think they’re very well structured, PJ (head coach Paul James) has done a great job coaching the group, keeping them positive. And that’s going to be the main thing. Staying positive, playing some quality defense and being able to compete I think is the goal. I look at this year as a survival year for them and a rebuilding year so they have to make sure they are building for the future.”

Stay up-to-date with every BBL signing ahead of the new season.

“It’s huge, as much as a player you’re told by coaches ‘it’s always the same with fans or no fans’ – it’s a lie. The fans do give you that lift, that energy, being able to hear them cheering for you, even when you’re playing an away game and you hear somebody booing you, it can motivate you.

“I think that will be a different dynamic and I think for the returning players you will actually see another element to their game as well. I think sometimes when the fans are there it can go one of two ways, there are a lot of players who probably freeze with bigger crowds and get caught up in the moment, and then other players will completely feed off it. I hope it’s the latter for most. It’s going to be an extra dynamic.”

“This is what I love about this sport. I can sit here and give you all the predictions in the world and usually they’re wrong. For me I think London have enough in the tank this year, they’ve learned a lot of lessons from previously, I think they’re going to go on and win the league.

“But the thing that is amazing about this league is the unpredictability, we’ve had so many changes. Players come and go. Hopefully there are no injuries but that’s part of the game, injuries happen. London also get to compete in Europe this year, does that change the dynamic and motivations of this season?

“As much as I’m saying London are the favourites, it’s so unpredictable. I hope we have a season like last year when the silverware was spread out. It would be nice to see other teams win some silverware as well and take it back to their respective clubs.”