Good Boy Bobby returned to winning ways for the first time in over a year as Nigel Twiston-Davies’ likeable chaser enjoyed Listed success at Wetherby on Friday.

The eight-year-old, ridden by regular partner Daryl Jacob, had gone seven outings without victory after taking an Intermediate Chase at Bangor-on-Dee in October 2020.

Pitched into the highly-competitive Cash Out At bet365 Handicap Chase, taking on 10 rivals, the son of Flemensfirth made every yard of the running and was never headed, holding off strong challenges from Cracking Destiny in second, Galahad Quest in third and Éclair D’Ainay fourth.

Porticello powered clear to win the Listed Wensleydale Juvenile Hurdle for the in-form Gary Moore team, earning quotes of 16/1 for the Triumph Hurdle with Sky Bet.

Elsewhere on the card, Ashtown Lad made a winning chase debut for Dan and Harry Skelton, making the most of a sloppy round of jumping from market leader Barbados Buck’s who could only finish third for Bryony Frost and Paul Nicholls.

At Uttoxeter, Minella Drama also landed the odds on chasing debut for Donald McCain despite jumping out to his right, having last been seen finishing second behind My Drogo at Aintree in April.

Speaking after the race, McCain said: “He’s very talented and very hot but a bit quirky. He’s the same at home every day, just a bit hard on himself.

“We’re trying to keep a lid on him with the hood on but at the same time, we’re waking him up to jump.

“He’s just got a bit awkward over one [two out] but we’ve got away with it and that’s all that matters. 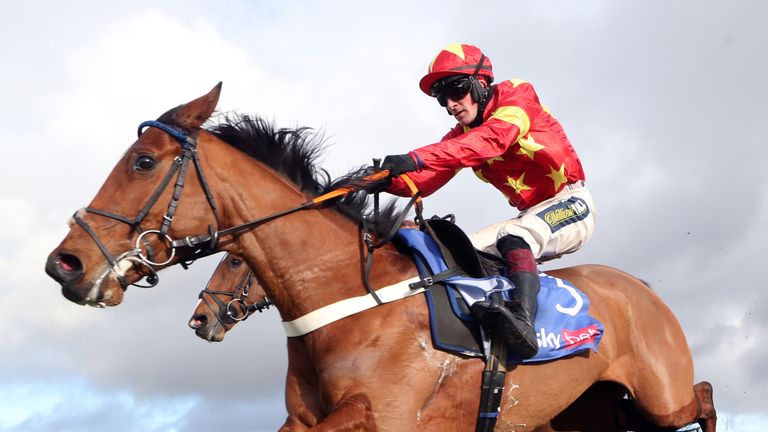 “You’ve got to go and get the practice in because there are going to be big days in the spring hopefully.

“We’ll go home and have a look at where we can go. I don’t think there’ll be another novice handicap but we’ve got the one run under our belt so we can go to a decent novice event and see how we go.”

Harry Fry continued his fine early season form with a double at Uttoxeter, courtesy of Lady Adare and Imperial Esprit.

The Dorset-based trainer has enjoyed five winners from his last 17 runners at a strike rate of 29 per cent.

Fry has two runners at Ascot on Saturday, including Boothill in the Listed Bateaux London Handicap Hurdle, live on Sky Sports Racing.