The exciting start to the NBA season continued on Thursday night with some impressive road wins for the New York Knicks, Memphis Grizzlies and Utah Jazz.

Elsewhere, Luka Doncic was doing his thing for the Dallas Mavericks and the Washington Wizards continued their impressive start to the season.

Here is the round-up of all of the key action. 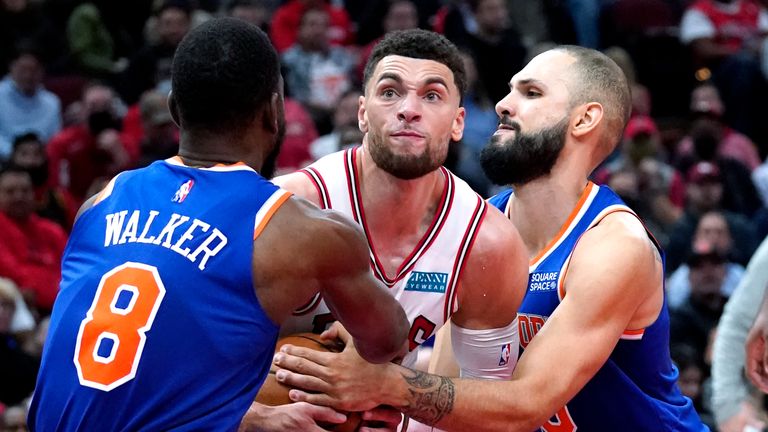 Kemba Walker scored 21 points, RJ Barrett added 20 and the New York Knicks hung on to hand the Chicago Bulls their first loss of the season 104-103.

Julius Randle had 13 points and 16 rebounds. Derrick Rose came off New York’s bench to score 12 points against his former team as the Knicks won their second straight and improved to 4-1.

Chicago star Zack LaVine scored 25 points, despite playing with a torn ligament in his left thumb.

The Bulls went on a 12-0 run in the final minutes to nearly tie the score in a game the Knicks seemingly had wrapped up.

LaVine’s dunk with 9.5 seconds left trimmed New York’s lead to one point after the Knicks held a 104-91 advantage with 2:59 left. LaVine’s thumb was taped up after he was injured Monday in Toronto.

Randle missed a pair of free throws with 4.7 seconds left to give Chicago the final possession, but DeMar DeRozan missed a 15-foot, pull-up shot as time ran out. Christian Wood led Houston with 16 points and Jalen Green had 13 points on 3-of-16 shooting. He missed all eight of his three-point attempts. Rockets rookie Alperen Sengun had 14 points.

Houston’s shooting struggled, particularly from behind the three-point line. The Rockets made just 9-of-44 from beyond the arc, just 20.5 per cent.

Luka Doncic scored 10 of his game-high 25 points in the fourth quarter as Dallas beat San Antonio.

The Mavericks went ahead to stay on Doncic’s alley-oop pass to Dwight Powell for the finish that made it 86-84 with 8:33 left. They stretched that to an 11-point gap by the time Doncic hit a step-back three-pointer about three-and-a-half minutes later.

Jalen Brunson added 19 points for the Mavericks, while Dorian Finney-Smith had 14 and Maxi Kleber 12. They all had at least three three-pointers, the same as Doncic. Kelber also had 10 rebounds and six blocked shots.

Dejounte Murray (23 points and 10 rebounds) and Jakob Poeltl (14 points and 13 rebounds) had double-doubles for the Spurs. Bryn Forbes had 15 points on five threes. Lonnie Walker IV, starting in place of the injured Doug McDermott, scored 14. Joel Embiid shook off lingering pain in his right knee and had 30 points and 18 rebounds to lead Philadelphia to victory over Detroit.

Embiid remains hampered by a right knee that hasn’t been right since he suffered a torn meniscus during last season’s playoffs.

Saddiq Bey led the Pistons with 19 points. Tobias Harris scored 17 points and Maxey had 16 for the Sixers.

Full report for this game here Washington rested Dinwiddie, who missed almost all of last season because of a knee injury, on the second night of a back-to-back. The Wizards were also without Daniel Gafford because of a thigh issue. The Hawks cut a 20-point second-half deficit to five in the fourth quarter, but Harrell dunked off a pass from Beal, and then a dunk by Beal made it 115-106.

John Collins led Atlanta with 28 points on 14-of-16 shooting, and Trae Young added 15 points and 13 assists. Ja Morant made a driving layup with 57.9 seconds left and shone in Stephen Curry’s home building once again, scoring 30 points as Memphis made it two straight thrilling overtime wins against Golden State.

Curry wound up with 36 points, but missed two key three-pointers late in a rematch of the play-in game from five months ago that Memphis won 117-112 in OT on May 21 at Chase Center.

Curry missed a three to end regulation, leaving the teams tied at 98, then another with 1:18 remaining in OT to finish 7-for-20 from deep in the Warriors’ first loss following a 4-0 start.

Desmond Bane scored 19 for the Grizzlies, who ended a two-game skid and concluded their four-game West Coast trip with a back-to-back following a 116-96 defeat at Portland on Wednesday night.

Damion Lee added 14 points off the bench for Golden State.