Tyson Fury’s stinging honesty could make anyone wince – but not Melissa Takimoglu, who has guided some of boxing’s biggest stars through a media whirlwind.

Britain’s heavyweight king recently created bedlam in Las Vegas, where he demolished Deontay Wilder for a final time after bellowing for the cameras in a raucous build-up.

Takimoglu, a PR representative for Fury’s US promotional team, Top Rank, was always by his side.

“But he has always stood his ground with me.”

Fury left Wilder face down on the canvas in the dramatic finale of a punishing battle.

But if he’s wrestling through a frenzy of microphones and fans, then he’ll look to Takimoglu.

“There’s hundreds of people running to get to him,” she recalls.

“I jump out the car first, because I know where we’re going. He knows to follow the hair.

“If I get bumped or something happens to me, he will literally stop and will say, ‘You alright, you okay? Right, come on then, let’s go!’

“He’s very aware of his entire team. He cares about everybody.”

Takimoglu wasn’t always racing through a media scrum with the world heavyweight king.

She witnessed the harsh reality of the sport while moulding prospects into prolific ticket sellers during her PR education in south London.

Some of those fighters now sell out huge arenas, but some don’t. A few suffered on the way, including Melissa.

“After that, I was going to quit boxing,” she told Sky Sports.

It took a phone call from Isaac Dogboe, a charismatic world title challenger, to bring Takimoglu back.

“I was like, ‘You can absolutely forget it, I hate boxing. I never want anything to do with boxing again. I don’t want to know about it.’

Dogboe fulfilled his promise as did Takimoglu and Top Rank, the US promotional powerhouse, were eager to welcome back the likeable Ghanaian.

Even after Dogboe’s world title reign had ended, Takimoglu was still in demand.

“I got a call from Top Rank from [Chief Operating Officer] Brad Jacobs. I owe everything to Brad Jacobs.

“He is the one that came to me and said, ‘We need to do a press conference for Crawford vs Khan. Would you be able to help us?'”

Takimoglu was now working with Crawford, a pound-for-pound star, and admits that her skills of persuasion have been tested.

Retaining your humour also helps, along with commanding respect.

“At the beginning, I was dismissed a lot, especially as I was new to the industry.

“The first thing people do is they look straight past you. They don’t think that you are relevant. When you are standing with a fighter, you must be someone who is not important.

“There’s always that look they give you, but they don’t necessarily say anything. They are not horrible or rude to you, they just don’t say anything.

“I think where I’ve gained the respect by being seen with the fighters and the fighters listening to me, taking my direction, not anyone else’s.

“Seeing my campaigns and hearing what I have to say. I’ve now earned the respect, but it took a lot of eating c**p to get here.”

🚨I’m absolutely delighted to say that I have signed an exclusive partnership with Top Rank, heading up their PR and media relations in the UK. pic.twitter.com/veaaiQJnw6

After a successful promotion for Crawford-Khan, she now has an exclusive role with Top Rank as their UK media relations officer, working with elite champions such as Scotland’s Josh Taylor and American Mikaela Mayer.

Can Taylor become the face of British boxing?

“Absolutely, he’s already on his way. I think he’s proven that in the Ramirez fight.

“But you have to do PR. You can’t be a star without doing PR and media training.”

The undisputed world champion was among the ringside analysts for Anthony Joshua’s recent world title defeat by Oleksandr Usyk. 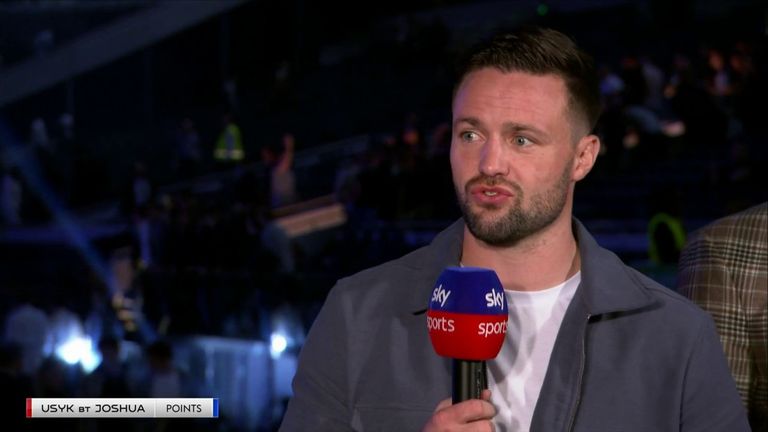 “He wants to do punditry. He’s very committed to that. He always asks my opinion. ‘How did I do, can I improve?'”

Mayer could soon make her UK debut, if she wins her upcoming world title unification clash against Maiva Hamadouche, live on Sky Sports.

“As long as she can deliver in the ring, and she spends time in the UK and engages with the fans and gives them time, she can definitely be a big star here.”

Fury’s stardom in Britain is assured, having returned as a conquering hero.

But the whirlwind swirling around him may have died down for a few weeks.

Takimoglu reveals: “The question I get most asked by fighters is this – can you make me famous like Tyson Fury?

“I’m not saying I’m the reason why Tyson is famous. Top Rank have done a phenomenal job with him, and I have a part to play in it, from the UK side.

“I say, ‘It’s not as simple as that. You can’t just do one interview and you’re going to be famous. You don’t understand how hard Tyson works with the media.’

“He will do three hours straight. You have no idea what he does behind the scenes.”

Fury might be spared another marathon interview session for a while, but he’ll be back for another chaotic fight week soon, with Takimoglu leading the way again.