Saturday night saw no less than 11 games of NBA action and MVP Nikola Jokic was on top form as the Denver Nuggets won over the Timberwolves in Minnesota.

Elsewhere, the Boston Celtics lost to the Washington Wizards for the second time this season as Bradley Beal starred in a double-overtime thriller in the capital.

The last unbeaten record in the NBA is gone as the Utah Jazz lost for the first time against the Chicago Bulls, and the only team previously without a win is now off the mark as the Detroit Pistons won at home to the Orlando Magic.

Here is a full round-up of a packed Saturday night of action. Nikola Jokic had 26 points and 19 rebounds as Denver completed a late rally to win its 12th in a row against Minnesota.

Monte Morris made a layup to break an 89-all tie with 2:04 to play, and Jokic added a pair of free throws to give the Nuggets a four-point lead, their largest of the game.

Malik Beasley scored all of his 18 points on 3-pointers to lead the Wolves, who got just 14 from Karl-Anthony Towns. Minnesota’s big man shot 4 of 11 from the floor and had only eight rebounds.

Jokic’s defense had a lot to do with that. Playing for the second straight night on an injured knee, the NBA’s reigning MVP went 10 for 23 from the floor, dished seven assists and frustrated Towns inside.

The Nuggets ground out the win in the final seconds thanks to a superb block by Will Barton. The Bulls grabbed a 17-point lead in the fourth quarter and hung on after the Jazz pulled within five in the closing minutes.

LaVine, playing with a torn ligament in his left thumb, scored eight in the fourth quarter. Nikola Vucevic finished with 16 points – despite shooting 4 of 19 – and 12 rebounds, and the Bulls (5-1) took out the NBA’s lone remaining undefeated team. 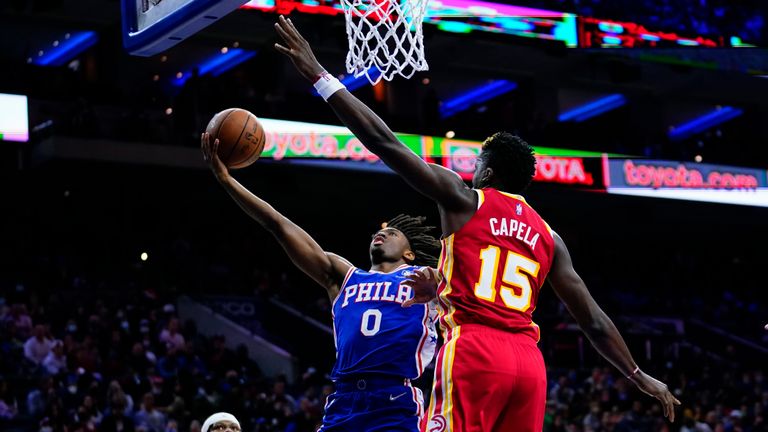 Philadelphia carried a 60-36 advantage over the Hawks in the paint while outscoring Atlanta by a 34-14 margin on fast-break points. Six Sixers finished in double figures with Tyrese Maxey (16), Seth Curry (15), Matisse Thybulle (11) and Shake Milton (11) all adding to the scoring party.

Cam Reddish led the Hawks with 16 points on 7-of-14 shooting from the floor. Trae Young and Bogan Bogdanovic each had 13 points, but Young struggled at 5 for 15 from the floor and only got to the foul line four times.

It was the first meeting between the teams since Atlanta beat top-seeded Philadelphia in seven games in the Eastern Conference semifinals. The 76ers’ Game 7 defeat was punctuated by by Ben Simmons passing on an open dunk in the final minutes – a flashpoint in the ongoing drama between the All-Star point guard and the organisation. Jaylen Brown had 34 points for the Celtics while Jayson Tatum added 27 points and a career-high 15 rebounds for Boston, but made just 10 of his 32 shots, something which needs addressing if the Celtics wish to truly contend for a title.

Spencer Dinwiddie and Montrezl Harrell added 20 points each for Washington, which improved to 5-1 with its second victory over Boston in three games. R.J. Barrett made six 3-pointers and poured in a career-high 35 points to lead New York in scoring for a second straight game, and the Knicks beat New Orleans for their fifth victory in six games to start the season.

Evan Fournier hit five from deep and scored 19, and Kemba Walker made four threes and also scored 19 for the Knicks, who never trailed and led from the time Walker hit from deep 16 seconds after the opening tip.

The Knicks went 19 of 33 (57.6 per cent) from 3-point range as a team, the difference in a game that saw the teams close to even in most other statistical categories. New Orleans, which has opened the season with six losses in seven games, made 11 of 33 (33.3 per cent) from deep.

Jonas Valanciunas led New Orleans with 27 points and 14 rebounds, while Devonte’ Graham finished with 17 points. Brandon Ingram was ruled out before tip-off with a right hip contusion. Stephen Curry scored 20 points in 27 minutes while getting ample rest, Draymond Green did a little bit of everything as usual, and Golden State thumped Oklahoma City.

Shai Gilgeous-Alexander scored 15 for the Thunder, held to 35.8 per cent shooting.

Green added 14 points, 11 rebounds and eight assists, and Andrew Wiggins also scored 14 in the second meeting over five days between the teams. The Warriors won 106-98 on Tuesday at Oklahoma City.

Curry was 2 for 6 for five points in the first half, 1 of 6 on threess. The Warriors led 55-44 at intermission but the league’s reigning scoring champion warmed up in the third and scored 15 that quarter. Duncan Robinson and Kyle Lowry scored 15 points each, Lowry added eight assists as the Heat made 21 3-pointers, one short of the franchise record set last May at Milwaukee.

Ja Morant and De’Anthony Melton led the Grizzlies with 20 points each, Desmond Bane finished with 17 points and Kyle Anderson scored 13. Dejounte Murray had 23 points and nine assists as San Antonio pulled away in the final minutes for a victory over Milwaukee that snapped a four-game losing streak.

Derrick White added 17 points and Bryn Forbes scored 16 against his former team to help the Spurs (2-4) take down the defending NBA champions on the road.

Giannis Antetokounmpo led Milwaukee (3-3) with 28 points and 13 rebounds but was in foul trouble in the second half. Khris Middleton had 19 points for the Bucks, who lost their second straight home game. The Suns used a 50-12 run to break open the game. The dominant stretch – which included a lot of Suns fast-break buckets and a lot of Cavs turnovers – lasted from the middle of the second quarter to late in the third and turned a 14-point deficit into a 24-point lead.

Booker added nine assists on his 25th birthday, while Chris Paul added 16 points and 10 assists. Ayton shot 8 of 10 from the field but left in the second half with a right leg contusion.

Cedi Osman led the Cavaliers with 20 points off the bench. He made 6 of 12 shots from 3-point range. Cleveland coach J.B. Bickerstaff pulled most of his starters by the end of the 50-12 run, frustrated by their ineffectiveness. Jeremi Grant scored 22 points and the number 1 draft pick Cade Cunningham added seven rebounds in his NBA debut and Detroit beat Orlando for its first win of the season.

Cunningham missed the preseason and the first four games of the regular season with a sprained ankle.

Kelly Olynyk had 18 points for Detroit, while Saddiq Bey and Josh Jackson each scored 13. Barnes, the fourth pick in the draft this year, hit a pair of free throws with 6.2 seconds remaining to give the Raptors the final margin. The Pacers’ Domantas Sabonis missed a hurried 3-pointer in the final seconds.

The Raptors never led by more than three until the final quarter, then surged to a 92-84 advantage on Fred VanFleet’s three with 1:44 remaining. VanFleet finished with 16 points. OG Anunoby had 15.

Sabonis led the Pacers with 22 points and 14 rebounds. Caris LeVert scored 15 in his season debut.