Amir Khan and Kell Brook shoved their foreheads together and angrily argued as tensions reached an all-time high.

Their long-standing rivalry has been years in the making but will finally be settled inside the ring on February 19 in Manchester, live on Sky Sports Box Office.

Before a word was spoken they clashed at a press conference on Monday, butting their heads together during a face-off and requiring security guards to haul them apart.

Brook said about finally finalising a fight: “That’s when Amir Khan will hit the deck for the final time.”

Brook explained the lengthy wait for the biggest all-British fight outside of the heavyweight division: “He’s always veered off, never given me respect, never acknowledged me.

“He has run away.

“It has got to a part of his career where there is nowhere else for him to run.

“I have wanted it for many years.”

Khan argued back at Brook: “In the past 10 years I have fought two of the best pound-for-pound best fighters.

“What I have achieved speaks for itself.

“There is no point crying about the past. In the past he hasn’t deserved this fight.

“Come February 19 it will be time to see if he can back those words up.” 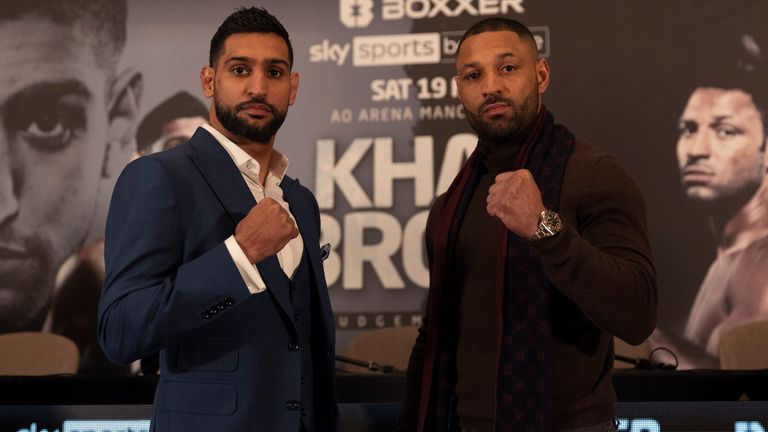 Khan insisted he has never previously seen Brook as a worthy opponent: “I am coming levels down by taking this fight. I have fought the best in the world. I have conquered America.

“But people want to see me punch him in the face.

“It’s my time now to put him in his place and move onto bigger and better things.”

Brook’s temper flared and he shouted: “He’s in cuckoo land.

“You are getting knocked clean out. I will knock you spark out.”

Khan hit back: “It’s easy to talk a big game. You are very bitter. You’ve always had that bitterness.”

Brook mocked his rival’s “celebrity” status but Khan argued: “If I wasn’t good, I wouldn’t be in this position.”

Khan mocked Brook: “You are half retired now. You look overweight!”

They rowed about agreeing a weight division for their fight. Khan insisted he was happy to meet at welterweight but Brook wasn’t willing to drop enough weight.

“I have bent over backwards for your demands,” Brook lashed out.

Brook won his IBF belt by ending Shawn Porter’s unbeaten record on away turf in the US.

Khan: “You got knocked out by a jab against Terence Crawford!”

Brook: “You looked for a way out against Crawford – you quit!”

This rivalry stemmed from their days as teenage amateurs.

“In the early days I was schooling him,” Khan claimed. “Why was I picked for the Olympic team [in 2004 when he won a silver medal]? Because I was schooling Kell with one hand.

The coaches would tell me: ‘Amir, just use one hand against him!'”

Brook’s trainer Dominic Ingle warned: “It is a matter of time until he lands. He still has speed and power.”

Khan said: “A car park scrap? He needs a little bit more than that.”

BOXXER promoter Ben Shalom said: “These are two icons of the sport. Both have conquered the world. Both won world titles. They come in with learnings from the big fights, from the mistakes they have made.

“But they come in at exactly the same position and that’s why this is so compelling.

“Finally we will find out – is it Brook or Khan?”