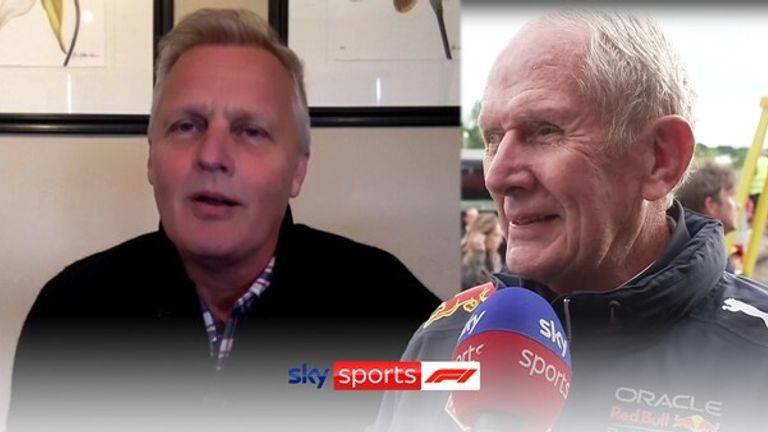 It wasn’t supposed to be like this. And nobody saw it coming.

Months after Lewis Hamilton was cruelly and controversially denied a record eighth world championship on the very last lap of the very last race of the 2021 season, Formula 1’s most successful driver and his juggernaut Mercedes team find themselves mired in an unexpected crisis.

Without even a sniff of a win from the first four races and suffering his worst start since 2009, Hamilton has already ruled himself out of the championship battle given Mercedes’ lack of pace while – with George Russell having started stronger – there have also been retirement questions posed at the Englishman.

Just what is going on?

Let’s delve into all the key topics – both on and off the track – surrounding F1’s powerhouse driver-team combo that have had a 2022 wake-up call.

What’s the issue and how have Mercedes got themselves into this position?

Mercedes have seen Ferrari and Red Bull speed off into the distance at the start of 2022 and the major issue surrounds their car’s aerodynamics and, to be specific, the fact it is ‘porpoising’ – or bouncing – more than others.

Indeed, the team that have mastered title-winning cars for the last eight seasons appear to have hit a snag with the design of their car for F1’s huge rules overhaul, which many expected to speed off into the distance once an innovative ‘zero-sidepod’ look was unveiled at pre-season testing.

The problem is that once the car hit the track, it bounced on the track. The design they had worked on, and was fast in the simulator, led to ‘porpoising’, a sensation many cars have but has hit Mercedes hardest.

“Our windtunnel was telling us we had really good downforce,” explained Hamilton. “And unfortunately we got on track, there was no bouncing in the windtunnel and we came across this phenomenon.”

To explain porpoising simply, it is the bouncing motion that is caused by downforce generated under cars as they gain speed. The speed sucks the car to the ground until the airflow stalls, at which point the downforce is lost and the car rises, only for the airflow to reattach and repeat the process.

While most teams have had this issue – even leaders Ferrari – it is largely just on the straights, while Mercedes’ porpoising carries on into the corner. As you can imagine, that’s not great for lap time, and the team believe that is causing most if not all of their deficit – around a second per lap. 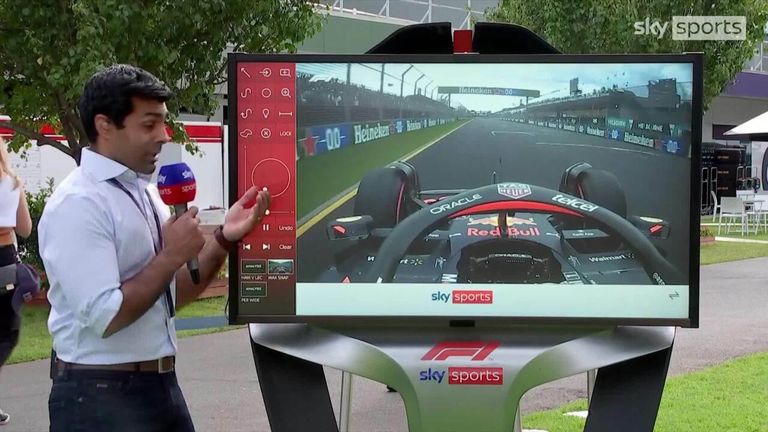 Trying to stop the bouncing also means Mercedes aren’t able to run their car as low as they want, harming downforce further.

“I think the fundamental issue that overclouds and overshadows everything is that our car is porpoising more than others,” said team boss Toto Wolff.

Hamilton, meanwhile, said being lapped by last year’s title rival Max Verstappen at Mercedes’ worst race of the season – Emilia Romagna GP – “shows how wrong we got it”.

Why has Hamilton been struggling compared to Russell?

So that’s Mercedes’ issues explained, but what about Hamilton’s? After all, he is 21 points behind Russell – the young British team-mate he was expected to dominate in Year One. Nico Rosberg, the Sky Sports F1 pundit and Hamilton’s former team-mate, even said in Imola that it was Russell who was starting to dominate Hamilton and suggested Mercedes were protecting the seven-time champion.

But it must be said that the points deficit between Hamilton and Russell paints a somewhat skewed picture.

Hamilton has dropped points to Russell in the last three races, starting in Saudi Arabia where he had an awful qualifying due to a late setup change. 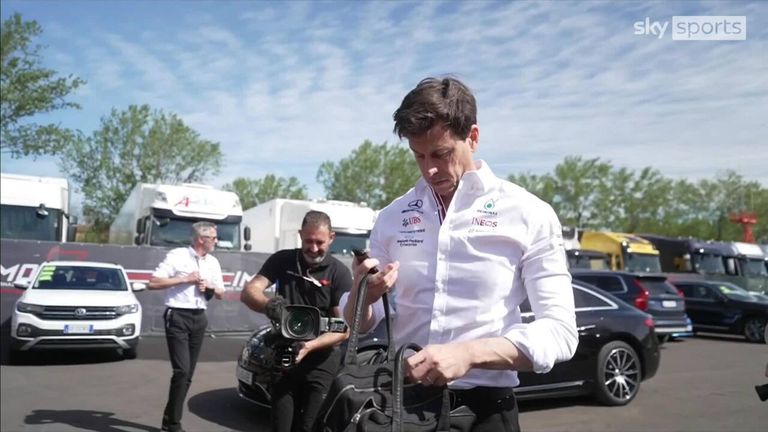 In Australia, there was a six-point swing after Russell got ahead of Hamilton – who he trailed in qualifying and the race – by pitting under the Safety Car. In Imola, meanwhile, Russell qualified ahead of Hamilton in an unrepresentative Q2 mired by red flags, and then moved from 11th to sixth at the start of Sunday’s race while Hamilton was left mired in the midfield. Unable to break a DRS train and then losing more positions with a slow Mercedes stop, Hamilton was left down in 13th while Russell was around 1s-per-lap quicker in clear air and finished fourth.

“When things have been more stable, Lewis has still been massively fast,” said Russell, who also believes Mercedes’ “nightmare” car is a big obstacle.

“We are equally struggling,” he added. “When the car is so far out of bed and it’s not in the right window, it doesn’t really feel like a proper racing car to drive.

“Perhaps with my struggles at Williams with very difficult cars, maybe that’s helped in some small regard.”

Will poor start and car have impact on Hamilton’s future? is he staying?

Now 37 years old, Hamilton has showed no signs of slowing down on the track and while Mercedes were competitive, it never really made much sense for him to move away with records still in his sight.

But with Mercedes seemingly out of the title picture – more on that later – that has led to some, such as former champion Mika Hakkinen, questioning Hamilton’s future and whether he would start thinking of switching teams or retiring altogether.

But Hamilton has been insistent that is “100 per cent committed” to Mercedes and rubbished Hakkinen’s “nonsense” comments.

Lewis Hamilton describes his experience in Formula One as a ‘lonely journey’, and explains how he’s trying to increase diversity within the sport.

Lewis Hamilton describes his experience in Formula One as a ‘lonely journey’, and explains how he’s trying to increase diversity within the sport.

“I’ve been with Mercedes since I was 13,” he said. “We’ve had amazing times together, we’ve ridden the highs and lows together. I’m 100 per cent committed to this team. There’s nowhere else I’d rather be.

“Just because we’ve hit a rough patch, that’s just not in my DNA to back out. We’re still world champions and we can fix this, it’s just going to take longer, it’s going to take a painful year I think, ultimately. A painful year we’re going to have to ride it out together.”

It is actually believed that F1 2022 has only made the Englishman more determined, rallying his team behind the scenes.

Possibly a nod to Red Bull’s Helmut Marko’s jibe that Hamilton may wish he had retired after last season, Hamilton then posted on social media: “Working on my masterpiece, I’ll be the one to decide when it’s finished.”

Are Hamilton and Merc they really out of the title fight?

Hamilton would say yes – he insisted there is “no question” that an eighth crown is impossible this year – while Wolff would say hold your horses – Mercedes’ boss recently gave a 20 per cent chance of recovering.

It really all comes down to Mercedes and their work to improve the car, as a fix to the porpoising would seemingly unlock a lot of lap time. The problem is, just as Mercedes may find updates to improve, their rivals will also be making gains all the time.

Lewis Hamilton concedes he is out of the championship battle after ‘a weekend to forget’ at the Emilia-Romagna Grand Prix.

Lewis Hamilton concedes he is out of the championship battle after ‘a weekend to forget’ at the Emilia-Romagna Grand Prix.

How much they can recover is an unknown, though Hamilton is already a whopping 58 points behind title leader Charles Leclerc and it’s hard to remember a driver having this bad of a start before winning the championship.

“Initially it’s frustrating because you see those points, [drivers] pulling away, and you want to be in that fight,” said Hamilton. “But when you’re struggling to even get in the top 10, the sooner you can accept the reality which your faced with, the sooner you can move that energy that strain onto a positive effort.”

Is there a fix to get season back on track?

Significantly, Mercedes hope to bring upgrades to their car for this weekend’s Miami GP, with trackside engineering director Andrew Shovlin saying the new parts would “hopefully indicate whether we are moving in the right direction”.

Mercedes have barely brought an update to their car so far this year, instead trying to understand what is going wrong. 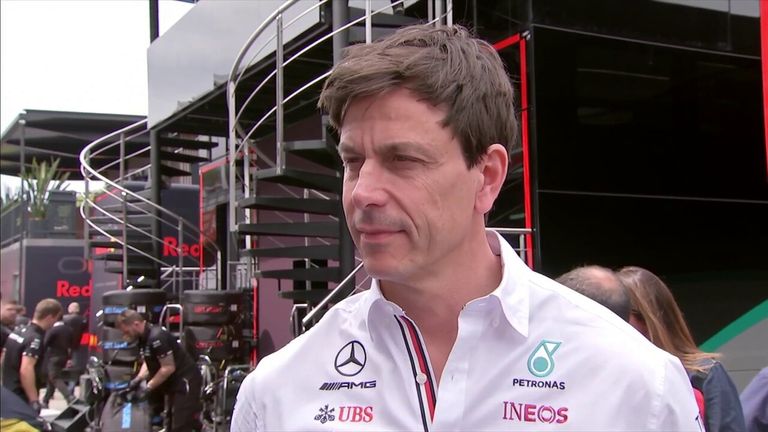 Toto Wolff explains his apparent confrontation with Lewis Hamilton after qualifying for the Emilia-Romagna GP.

Toto Wolff explains his apparent confrontation with Lewis Hamilton after qualifying for the Emilia-Romagna GP.

“We very much believe that the signs we’re putting in at the moment will help us to in effect run the car lower, where we believe we have all the aerodynamic goodness,” explained Wolff.

“But we haven’t been able to unlock it because of the bottoming out of the car.”

Hamilton added: “Maybe all of a sudden we’ll fix the bouncing and that will unlock the potential.”

Shovlin, however, did also stress that Mercedes were “not expecting to solve this overnight”.

What if there is no fix for this car?

Mercedes truly believe they can fix their porpoising and – as Hamilton says – unlock the potential of the W13. But Wolff says he is also open to the possibility that the innovative concept “simply doesn’t work”.

“It is a valid point [that the design concept may be wrong],” said Wolff. “All of the goodness and the badness happens mainly on the floor as it stands at the moment.

“We have interesting ideas and concepts that we are trying and that we are exploring that have to find its way onto the car in the next few races. I would say there’s no such thing as a concept being wrong.

“But is there a part of what we have done which simply doesn’t work with the regulations? And what is it? 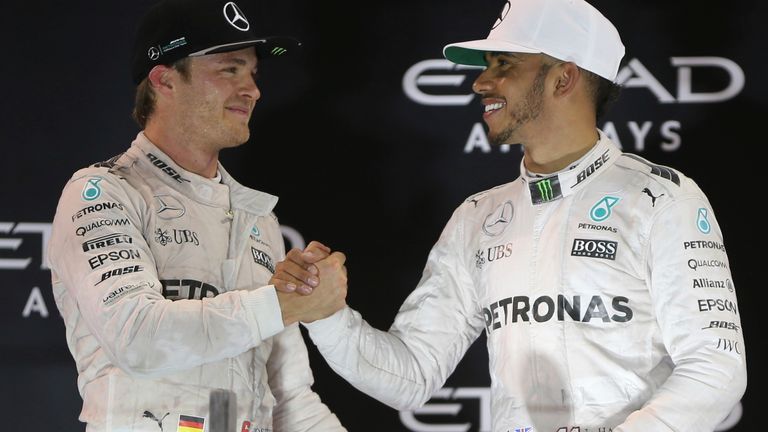 Nico Rosberg talks about his conflict with ex-teammate Lewis Hamilton and how Toto Wolff has used that experience to manage George Russell coming into the Mercedes team.

Nico Rosberg talks about his conflict with ex-teammate Lewis Hamilton and how Toto Wolff has used that experience to manage George Russell coming into the Mercedes team.

“You don’t need to throw away the goodness. But if there are fundamental areas that don’t allow us to unlock the potential we believe is in the car then obviously yeah, you need to cut your losses.”

If the car “doesn’t work” and can’t be improved to be a contender in its current state, then “cutting losses” could well mean Merc have to completely reset their car for the 2023 season. Not that that is a scenario Wolff is committing to.

“It would mean that you would say, where is the baseline now? Is there a new baseline we can start upon where we believe we can unlock more potential?” he explained.

“We believe this is the development we need to take. It’s quite a tricky exercise to do… before we take such decision, we need to really continue in the science and continue finding out what is [the problem].

“Only then you can say cut your losses and switch to next year if you understand where you got it wrong. And at the moment we simply don’t. Not yet.”