“It’s our Champions League final and we’re going at this with everything we have.”

Liverpool supporters have already been dreaming of a final day favour from Steven Gerrard’s Aston Villa against Manchester City. But Ralph Hasenhuttl delivered a reminder in his press conference ahead of the Reds’ Tuesday trip to Southampton that there’s another obstacle in Jurgen Klopp’s side’s way before any potential shootout for the crown on Sunday.

His Saints side are badly out of form with just one win in their last 10 Premier League games and such has been the momentum of Klopp’s quadruple-chasers, many are expecting the Carabao Cup and FA Cup holders to take City right to the wire in the title race.

Win at St Mary’s and Liverpool will be one point behind City going into the final round of games, where they host Wolves and hope their former captain can cause an upset at the Etihad.

But Hasenhuttl says his unlikely kingmakers are fired up to prove a point in their final home game of the campaign – and they have a track record of causing upsets of their own this season. Just ask City, who have twice been held to draws by the south coast side.

Upsets by Southampton this season

Tottenham, Manchester United and Arsenal have all also dropped points in fixtures against Saints this season, and while Liverpool won 4-0 at Anfield in November, they themselves were beaten 1-0 at St Mary’s in January 2021.

At the end of that game, Hasenhuttl was in tears, such was the emotion of finally beating a Klopp side, having previously struggled against the German in the Bundesliga and Premier League.

He’s motivated to pull off a repeat – and with a 10-day run-in to the game since last Saturday’s defeat at Brentford there has been plenty of time to come up with a plan. But he’s under no illusions how tough this will be.

“It would be easy to say do the same like last time,” he smiles, sitting down with Sky Sports after his press conference. “I’ve often spoken about why it was so emotional because it was such a tough fight and such a demanding game for me on the outside as well as the players on the pitch.

“There’s a reason they’ve only lost three games this season and if you want to do it you need a perfect day.

“On Tuesday, being part of this title race gives them an extra motivation but gives us also a chance, like West Ham [who drew with Man City on Sunday], to do something special.

“This is what the players want to do, they’re looking forward to this game and we’re hungry to show up at home.

We have to stress them in many ways and with a very good, aggressive way of playing football. Then you can wobble them a little bit, maybe.

“We’re all affected by situations and we have to stress them in many ways and with a very good, aggressive way of playing football. Then you can wobble them a little bit, maybe. Then it’s up to you, if you definitely hurt them with scoring goals and make it even more tough for them.”

Hasenhuttl makes the point that each of the top teams present different, individual challenges. His approach has to adjust. But what remains constant is the fact his team will need organisation, bravery and a slice of luck to come out on top.

“First you need a good start,” he says, mapping out the ideal performance from his underdogs. “Then the luck not to concede a goal, then score in the right moment to set them a little bit under pressure, then defend proper as a team – and this passion to defend, this passion to fight for the result is necessary.

“But then also the braveness to play football in the right moments. It’s something you need to do against these teams, no matter how strong they’re coming or how many injuries they have, or whatever.

“We have shown this season what we can do at home and we need everybody supporting us for this game because it will be a tough one for everybody. We can create an atmosphere here at St Mary’s, that’s what we’ve done this season very often and that’s what we need on Tuesday night.”

One-club Ward-Prowse in the spotlight after Noble tributes

Southampton are also likely to need something a bit special to find a way through the joint-best defence in the division. And the most likely candidate to do that is club captain James Ward-Prowse.

The midfielder was nominated for the Premier League Player of the Year award last week and has hit the headlines with four wonderful free-kick goals this season. With nine goals and five assists, he’s Saints’ talisman. 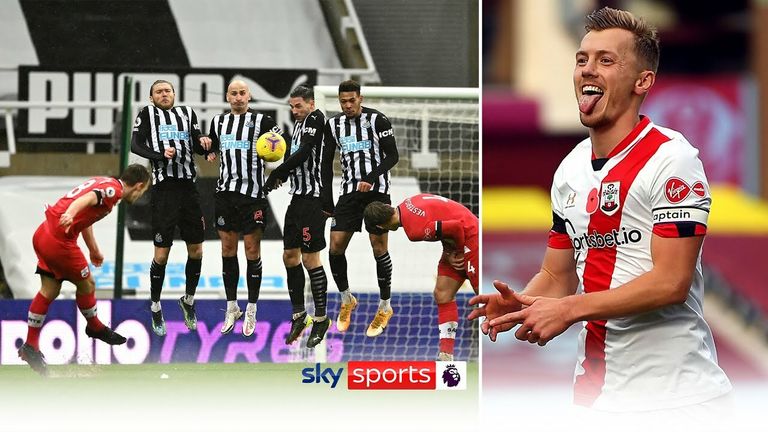 Interestingly, he will be in the spotlight just a couple of days after West Ham paid tribute to their own one-club icon Mark Noble in Sunday’s draw with City.

Hasenhuttl believes that special bond between local lad and club is an important one to harness – and insists Ward-Prowse, who has been with Saints since the age of eight, has the platform at Southampton to achieve great things in his career.

“Mark Noble had a long, long history playing for one club and this is a little bit unique in modern football because it seems it doesn’t mean so much to the players to stay for as long as possible in one club and be a legend there,” said Hasenhuttl.

“If you have a chance to do it and somebody decides to go this way it should be something special for the fans and for him also. Prowsey is on the way to it. I don’t know if he will last that long like Mark Noble at West Ham but I think coming from this region and playing for this club for a long time, he’s on the way to doing it.

“The good thing is he sees it doesn’t block him from getting international appearances or nominated for great awards because he performs well for us and, even if the team is not in the part of the table where we want to be, he shows his commitment to the club. His signing for a long time to the club was a clear signal for him and to the fans.”

A busy summer ahead at Southampton

That five-year contract Ward-Prowse signed last August was a big boost for Southampton, who had been fending off interest from other clubs in the 27-year-old.

But Hasenhuttl is now anxious for his team to kick on. A top-half finish looked a real possibility in February but, after a bad drop-off since then, he is clear there will be a busy summer ahead in the transfer market to try to realise that goal in 2022/23.

As ever, the targets for Saints’ recruitment team will be young, hungry players with potential.

“A lot of teams want to have a top-half finish in the league. When you see how much money they’ve invested in the last years to be in this half of the table and you see how difficult it is,” he says. “There are some examples from teams who are now in a relegation battle and not safe this season.

“The most important part for me – and this will never change for this club – is to reach, as quick as possible, the 40 points. We’ve had this very early in the season and finally couldn’t make the step then to end up higher in the table, which was an opportunity.

“The big chance we missed was disappointing for us. But the disappointing part will move quickly away when you know next season is coming and we will make some changes for the season.

“The general way with Southampton was always going with developing players. We will keep on going [with that approach] but we want to bring in players with the highest potential. Like Tino Livramento in the summer, who immediately showed he’s a massive player for us.

“This kind of player we’re looking for. Give them time to develop. With all young players we will have to be patient with them, there will still be ups and downs like in this season that cost you a few points but it’s the only way that makes sense for us and we will try to go this way in the future.”

That decisive transfer window is set to open in just a few weeks’ time. But first there is Liverpool. And the opportunity to send Southampton supporters into the summer with a spring in their step.

“Much more important than the result in the end is to show a resilience and that we are fighting and to make them proud,” Hasenhuttl finishes off in determined mood.

“This is what we want to do and you can be sure that the team that comes out tomorrow will be picked with players that want to do this.”